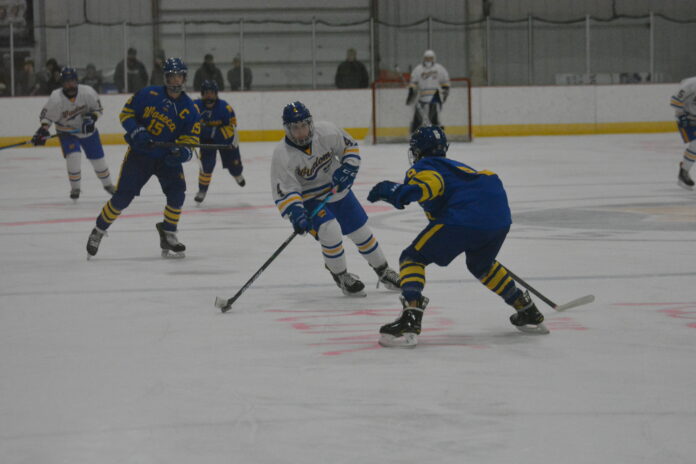 The Windom Area boys hockey team erupted on offense Saturday morning, scoring nine straight goals on its way to a 10-1 win over Worthington at the Windom Arena.

The Eagles raced to a 4-0 lead after one period, then added five straight goals to start the second.

Wriley Haugen got the Eagles on the board with back-to-back goals. Chase Hamlett and Brady Espenson added goals to give the Eagles a 4-0 lead.

Brady Espenson added back-to-back goals to start the second, with Nick Espenson and Sonny Heil adding goals for an 8-0 lead. Brady Espenson scored his fourth goal of the game shorthanded to give the Eagles a 9-0 lead.

Windom Area outshot Worthington 44-14 in the game. Grant Dronen finished with 13 saves in the win.

The Windom Area boys hockey team kept constant pressure on in the offensive zone Friday night, rallying for a 6-3 victory over Waseca at the Windom Arena.

Waseca raced to an early lead, but the Eagles tied the game early in the second, then scored three times in the third to seal the win.

Nick Espenson got the Eagles on the board, tying the game a 1-1 in the first period before Waseca scored twice to take the early lead.

Chase Hamlett scored late in the first period, pulling the Eagles to within 3-2. Then, Nick Espenson deflected a shot into the net 43 seconds into the second period, tying the game.

The Eagles took the lead 9:02 into the third on an unassisted goal by Cragen Porath. Brady Espenson then scored on the power play and Wriley Haugen added an empty-net goal late in regulation.

The Eagles outshot the Bluejays 56-20 for the game. Goalie Adam Dahna finished with 17 saves.

Next games: Check for updates after each game.
Windom Area: at New Ulm, Jan. 23