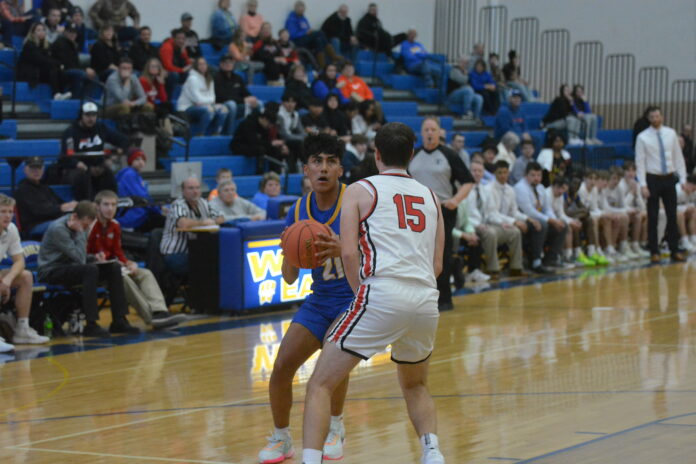 The Windom Eagle boys basketball team had a record-breaking performance Friday night, setting a new single-game scoring record in a 115-76 victory over St. James at Windom.

The Eagles shot over 70% from the field in the first half while cranking up the speed against the Saints. Windom poured in 78 first-half points, racing to a 29-point halftime lead.

The Eagles continued their hot shooting and break-neck pace to start the second half before eventually cooling down to finish shooting 65% from the field for the game. The Eagles also hit 14 three-pointers and shot 53% from three-point range.

Five Eagles finished in double figures in the win, led by 28 points and 19 assists from Henry Erickson. Abe McKibbin and Drew Rothenberger each added 20 points. Greyson Elder scored 17 and Bryan Macario finished with 14.

The Windom boys basketball team got off to a quick start Saturday afternoon, building a commanding lead on its way to a 90-49 win over Sibley East at Windom.

The Eagles were able to get into the lane early, which eventually opened up outside shots. Windom finished the game shooting 51% from the field.

The Patriots came out firing from the start, hitting four three-pointers in the first half to take a 17-point halftime lead.

RRC tried to battle back, as Ashton Juhnke scored 17 of his team-high 21 points in the second half. But the Falcons were never able to pull within double digits.

Mt. Lake Area-Comfrey was in control from the start Friday night, building a commanding early lead on its way to a 62-28 win at Nicollet.

The Wolverine defense held the Raiders to 14 points in each half. MLAC held Nicollet scoreless for over five minutes in the first half, pulling away to a 19-point lead.

The Wolverines then held the Raiders to just two points over the first eight minutes of the second half.

Westbrook-Walnut Grove’s defense bottled up Red Rock Central Friday night, as the Chargers rolled to a 53-31 victory at Lamberton.

WWG held the Falcons to 31% shooting for the game. Meanwhile, WWG crashed the offensive glass for 23 offensive rebounds, turning into second-chance points.

Isaac Simonson and Corey Arkell each scored 10 points in the loss for the Falcons.