Windom Teacher of the Year 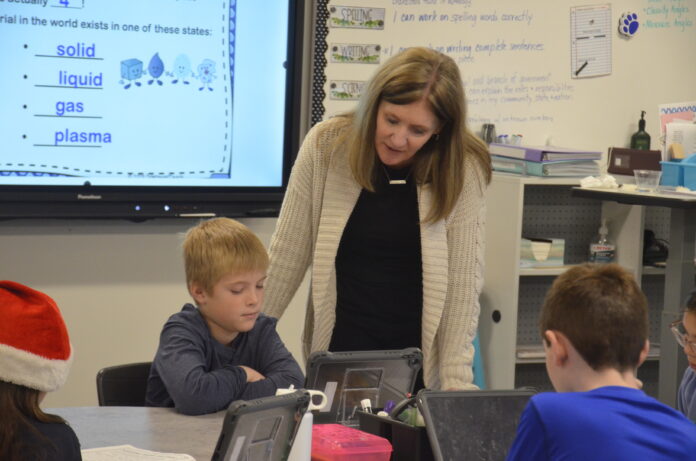 Even at a young age, Kim Rabbe knew that she wanted to be involved with education in some way, shape or form.
Rabbe used that desire to make an impact on young people’s lives and pursued it to the highest level. A 30-year veteran of teaching at Windom Elementary School, Rabbe was recognized as the district’s Teacher of the Year in November.
“I’ve always worked with children, whether it was babysitting, teaching Sunday school or teaching vacation bible school,” she said. “I really like working with children, they’re so much fun.”
Her education
Rabbe grew up not too far from here. She graduated from Trimont High School in 1987 and later attended Waldorf College in Mason City, Iowa for two years.
After receiving her AA degree there, she transferred to Mankato State University (now Minnesota State University) and received her elementary education degree with a minor in coaching. She received a master of leadership degree from Southwest Minnesota State University in Marshall in 2000.
Landing in Windom
After her college graduation, she taught grades 1-4 at St. James Lutheran School in Northrup.
She later applied for a teaching job at Windom because the district was hiring teachers at the second, fourth, and sixth-grade levels.
“I wanted to teach fourth grade because I had taught fourth grade during my student teaching in Fairmont,” she said. “There were over 400 applicants at that time, and I was very lucky to get a job here. I started teaching fourth grade in the fall of 1994.”
For more details on this story, see the Jan. 4 edition of the Citizen.
Watch www.windomnews.com for regular weekday updates at 10:30 a.m. and 3:30 p.m., plus BREAKING stories at other times. Follow CoCoCitizen @CitPub on Twitter.