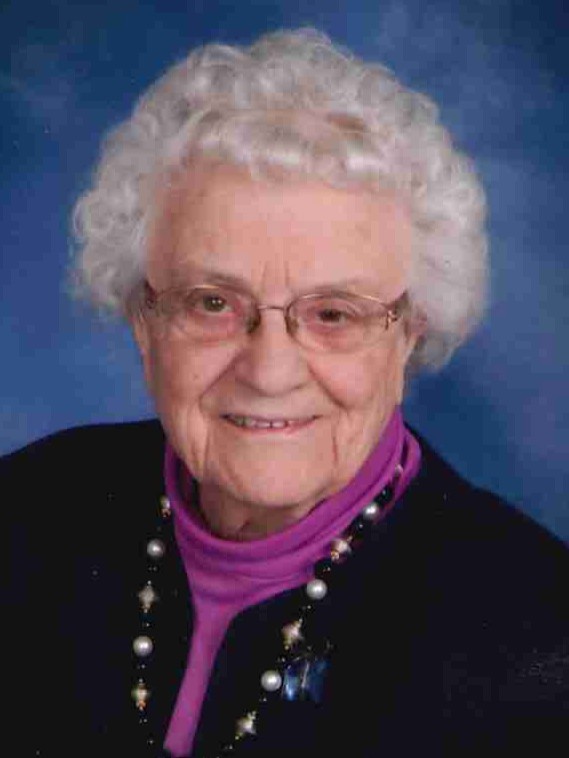 Sophie Ruth Klassen, age 99, of Mountain Lake, MN, died Sunday, December 25, 2022, at her home in Mountain Lake, MN. She was born January 4, 1923, in Glasgow, Montana, to John D. and Elizabeth (Wall) Olfert. When Sophie was nine, her father passed away, and her mother later married Abraham C. Wall.

At the age of 12, Sophie accepted Jesus as her Savior at an evangelistic meeting at the EMB Church in Lustre, Montana. Later that summer she was baptized in a creek by Abraham Wall, her father and pastor.

Sophie attended grade school in Lustre, Montana. In the fall of 1937, they moved to Dallas, Oregon, where she attended high school. She completed her college education at the Bible Institute of Los Angeles (BIOLA), where she had many fond memories and cherished her Bible classes.

After graduating from BIOLA in the spring of 1946 with a certificate of Christian Education for Child Evangelism, Sophie returned to Dallas, Oregon, where she began teaching a children’s class. She also applied to a mission board and was accepted by the Indian Mission at Poplar, Montana, where she later served.

In the summer of 1946, Sophie became acquainted with Louis Klassen, who had recently lost his young wife due to a sudden health failure, leaving Louis alone with his newborn son Delbert. After some long-distance correspondence and several trips to see each other, Sophie and Louis were married on June 20, 1947, at the Evangelical Mennonite Brethren Church in Dallas, Oregon. Her farm life began on the honeymoon trip to her new home in Mountain Lake, MN, when Louis stopped in Montana to buy a combine. Machinery had been scarce during the war.

During her 66 years on the farm, Sophie gave her strength and energy to raising eight children, milking cows, feeding baby calves, tending to her large garden, canning, cooking, baking, cleaning, sewing, mending, quilting, and later spending time with her grandchildren and great grandchildren.

Sophie remained committed to serving the Lord. She was a Sunday School teacher, Beginners Sunday School superintendent, chairman of the women’s ministry, and served on the church food committee and Christian School auxiliary. She read the entire Bible through many times in her lifetime and prayed consistently for her children and grandchildren by name, and many others. She faithfully supported many ministries and thoroughly enjoyed listening to teaching and preaching at her church and via radio, TV, and internet.

Louis passed away on February 1, 2011. Three years later, Sophie moved off the home farm to Parkwood Place Apartments in Mountain Lake. She found joy in her friends, social activities, and entertaining visitors. She enjoyed Bingo, game night, group exercise, meals together, chapel, and especially putting puzzles together with others in the lobby.

On January 26, 2015, Sophie collapsed from a cardiac arrest, yet God restored her health completely. She continued fixing meals, walking, grocery shopping, driving her car, and communicating via computer and cell phone until nearly 100 years of age. In October, 2022, she said “I have no pain at my age,” and she gave glory to the Lord. She summarized her seven “overtime” years with Psalm 50:15, “…I will rescue you, and you will give Me glory.”

After attending the Christmas morning service at church and a potluck meal at Parkwood, Sophie went peacefully to meet her Savior while taking a nap. She will be remembered for her cheerfulness, encouragement, stability, optimism, generosity, love, grace, and kind smile. Her wonderful meals, Zwieback, rhubarb jam, beautiful quilts, and warm hugs cheered many.