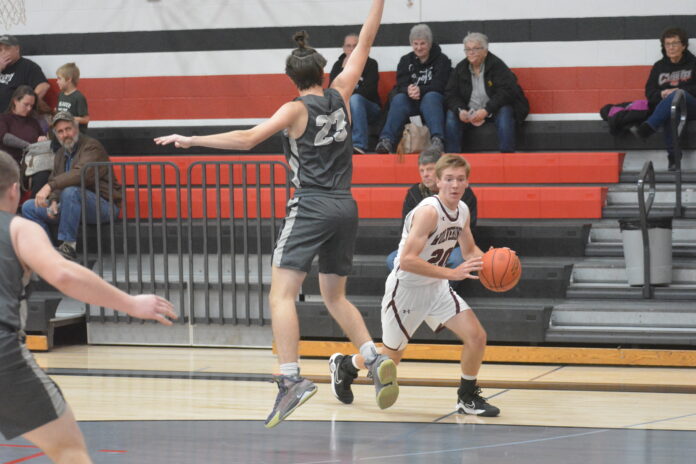 Jackson County Central built a double-digit lead in the second half Thursday, then held off a rally late to defeat the Windom Eagle boys basketball team 99-91 at Windom.

JCC rallied late in the first half to take a five-point halftime lead, then quickly stretched the lead to 13 points early in the second half.

But the Eagles battled back in the second half behind hot outside shooting, hitting 10 three-pointers in the game.

Windom cut the deficit to three points with just over three minutes to go, but JCC was able to seal the win from the free throw line, going 19-of-26 for the game.

Red Rock Central used a punishing inside game Thursday night to grab its first victory of the season, defeating Adrian-Ellsworth 74-63 in Lamberton.

The inside play helped set up Ashton Juhnke on the outside. Juhnke hit six three-pointers and led the Falcons with 23 points. Isaac Simonson and Jayden Lang each scored 15 and Corey Arkell added 14, including 12 in the second half.

A slow start proved to be too much for Mt. Lake Area-Comfrey to overcome in its season opener Thursday, as Heron Lake-Okabena-Fulda claimed a 67-54 victory at Fulda.

The Coyotes started the game with a 9-0 run and led 20-4 early in the opening half. HLOF stretched the lead to 19 points by halftime and was able to withstand a late MLAC surge in the second half.