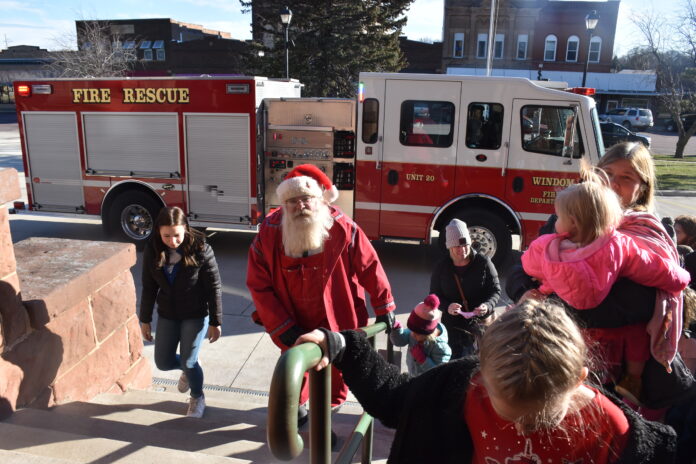 Area parents can mark their calendars (unless they already have done so), for Santa’s grand entrance in Windom — this Saturday. The plan is for Santa to be at the Courthouse from 10 a.m. to noon.

According to sources with direct knowledge of Santa’s schedule, he will initially arrive at the Windom Emergency Services Facility. From there, Santa will climb aboard one of Windom’s finest fire trucks.

Santa and the fire truck will travel through the Square, sirens blaring, before pulling up to the Courthouse steps. By that time, a big line of children and parents are traditionally waiting along the sidewalk and Courthouse steps to greet Santa as he makes his way inside. (People enter the Courthouse on the east side and eventually exit on through the west doors.)

Plans are for Santa to be seated in his grand chair, in front of the giant tree in the Courthouse rotunda. One-by-one, Santa will greet youngsters with most of them sitting on his lap for a quick photo and a conversation about what they may want for Christmas.

Often, youngsters bring along their Christmas lists to share with Santa.

Meanwhile, many local businesses are open throughout the day, all decked out for the holiday season and offering all kinds of Christmas specials. Check this week’s Shopper and also the coming weekend’s Shopper for advertisements that are sure to help area residents prepare for their Christmas gift-giving plans.

Watch future editions of the Citizen for updates on all sorts of holiday events — from the school concerts, to things like the Dec. 14 Living Nativity at American Lutheran Church.