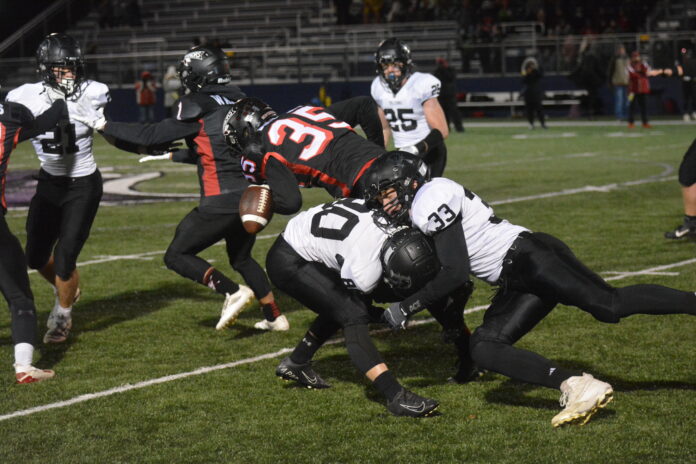 Red Rock Central’s defense was up to the challenge, but the Falcon offense was shut down at every turn Thursday night, as the Falcons fell 37-0 to top-ranked Wheaton-Herman-Norcross in the opening round of the Class Nine-Man State Tournament, played at Buffalo.

WHN held the Falcons to one first down gained in the first half and scored two defensive touchdowns and had a third set up because of a poor Falcon punt into a stiff wind.

Meanwhile, RRC’s defense forced four first-half turnovers, but RRC was unable to cash any of them in for points.

One of those turnovers came on the game’s first play from scrimmage, when WHN coughed the ball up and RRC’s Jake Jackson recovered, giving the Falcons the ball at the Warrior 38-yard line. But on fourth down, a pass from Isaac Simonson was intercepted and returned deep into Falcon territory.

RRC’s defense turned the Warriors aside on fourth down, turning the ball over on downs. Then, after a Falcon three-and-out punt, a WHN drive was halted when Jayden Lang intercepted a pass, returning it to the Falcon 22.

But after three plays and no yards gained, RRC had to punt. But the snap for the punt sailed over the head of the Falcon punter. WHN’s Grant Dawson recovered the ball in the end zone for the game’s first touchdown. Bryant Callenius added the two-point conversion run, giving WHN an 8-0 lead.

The first drive covered 64 yards in nine plays, capped on a 29-yard pass from Marshall Tolifson to Clint Determan for a touchdown. The two-point conversion gave WHN a 16-0 lead early in the second quarter.

The next WHN drive went 67 yards in eight plays, capped with a 4-yard touchdown run by Callenius. The two-point conversion pass gave the Warriors a 24-0 lead.

RRC was again held to three-and-out on its next drive, but opted to try to pick up the first down and was stopped short. But the Falcon defense turned the Warriors aside when Lang picked off a pass in the end zone.

On RRC’s next drive, an intentional grounding penalty pushed RRC back to its own 15 and forced a punt. The punt was shanked into the wind, with the Warriors falling on the ball at the Falcon 11. Two plays later, Brayden Hofer scored on a 2-yard run. The extra-point kick gave WHN a 31-0 lead.

RRC picked up its initial first down of the game on the first play of the ensuing drive, but an interception on the next play turned the ball over. But with time running out in the first half, RRC’s Vander Mathiowetz picked off a Warrior pass, keeping the deficit at 31-0 at halftime.

However, the Warriors would score the final points of the game on the first drive of the second half. RRC started the drive pinned at its own 10. On third down, RRC tried to set up a screen pass, but Simonson’s pass was intercepted by WHN’s Brody Morrow, who walked one yard into the end zone for a 37-0 Warrior lead.

RRC was able to drive down to the Warrior 11 on its next possession, but was stopped short on fourth down, turning the ball over on downs.

Then, to start the fourth quarter, RRC drove the ball as far as the WHN 19. But a tackle for loss and three incomplete passes turned the ball over on downs, allowing WHN to run out the rest of the clock.

Carter Therkilsen led RRC on the ground with 54 yards rushing on 25 carries. Mathiowetz had four rushes for 21 yards.

Simonson completed 6-of-21 passes for 74 yards. Mathiowetz had three catches for 24 yards while Lang had two catches for 27 yards.

With the win, WHN advances to next week’s state semifinals, played at U.S. Bank Stadium in Minneapolis.

RRC ends its season with an 8-4 overall record.