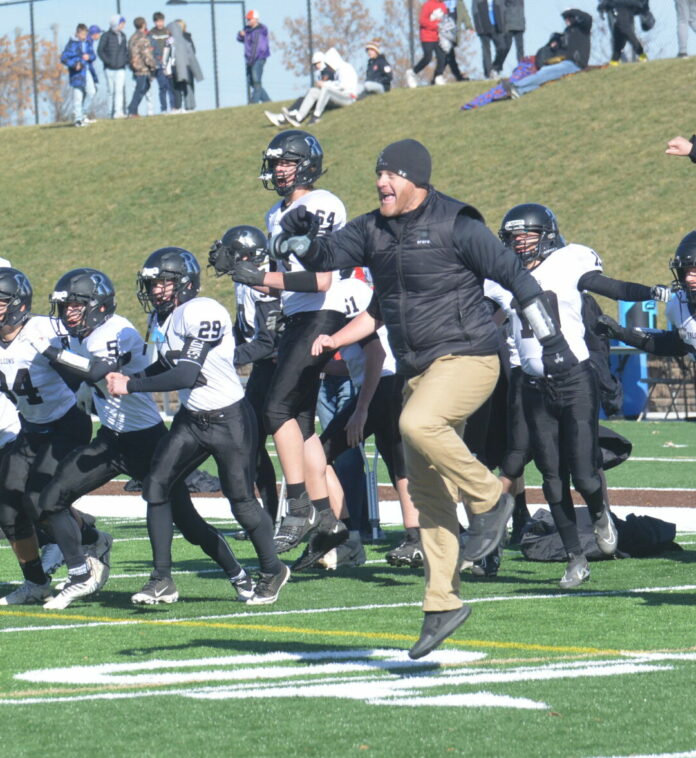 Red Rock Central mounted a furious fourth-quarter comeback to force overtime, then came up with a goal line stand in the extra period to claim a 34-28 victory over Mt. Lake Area in the Section 3 Nine-Man championship game, played at Southwest Minnesota State University in Marshall.

MLA got off to a hot start. RRC was held to a three-and-out on the game’s opening possession, but a bad snap forced a shanked punt and MLA took over from the Falcon 19-yard line.

In the second quarter, the Wolverines marched 80 yards in 14 plays, aided by a 24-yard fake punt pass from Jake Evers to Rahn. Evers cashed in the drive with a 1-yard run for a 14-0 lead.

But after being stifled for the first quarter-plus, RRC finished the first half strong. On the ensuing kickoff, Vander Mathiowetz broke a tackle and outraced the coverage 76 yards for a touchdown, cutting MLA’s lead to 14-6.

The Wolverines answered, moving quickly upfield and scoring on a 27-yard pass from Evers to Chase Anacker for a 20-6 lead.

But RRC regained momentum into halftime, marching 62 yards in under three minutes. Carter Therkilsen capped the drive with a 1-yard run, cutting MLA’s lead to 20-12.

The Wolverines were able to mount an impressive scoring drive late in the third quarter, as Evers scored on a 1-yard run and added the two-point conversion to give MLA a 28-12 lead.

But early in the fourth quarter, the Falcons grabbed momentum. Isaac Simonson hit Jayden Lang with a 31-yard alley-oop for a touchdown. The two connected again on the two-point conversion, cutting MLA’s lead to 28-20.

Then, after forcing MLA to go three-and-out, the Falcons took over near midfield and made the most of the good field position, scoring on a 5-yard Therkilsen run. Simonson hit Mathiowetz for the two-point conversion, tying the game at 28-28.

MLA was able to mount one more drive deep into Falcon territory, but a bad snap pushed MLA backwards and back-to-back incomplete passes turned the ball over on downs.

Late in regulation, RRC marched into Wolverine territory, driving down to the MLA 25. But a sack pushed the Falcons back, and MLA’s Peyton Banks intercepted RRC’s desperation pass to end regulation.

MLA won the coin flip for overtime and opted to play defense first. RRC capitalized, scoring on fourth down on a 4-yard pass from Simonson to Tyler Therkilsen. Simonson hit Mathiowetz for the two-point conversion, giving the Falcons a 36-28 lead.

MLA’s Evers was stopped just short of the goal line on third down. Then, on fourth down from inside the 1, a run attempt by Evers was stuffed before he got to the line of scrimmage, sending the Falcon sideline into celebration.

Carter Therkilsen led RRC on the ground with 28 carries for 143 yards.

Simonson completed 18-of-26 passes for 177 yards. Lang had four catches for 67 yards while Tyler Therkilsen had three grabs for 48 yards.

Karschnik led MLA on the ground with 20 carries for 78 yards. Evers had 22 carries for 38 yards.

With the win, RRC advances to the Class Nine-Man State Tournament, where the Falcons will face Section 4 champion Wheaton-Herman-Norcross. That game will be played on Nov. 10 at Buffalo High School, beginning at 7 p.m.