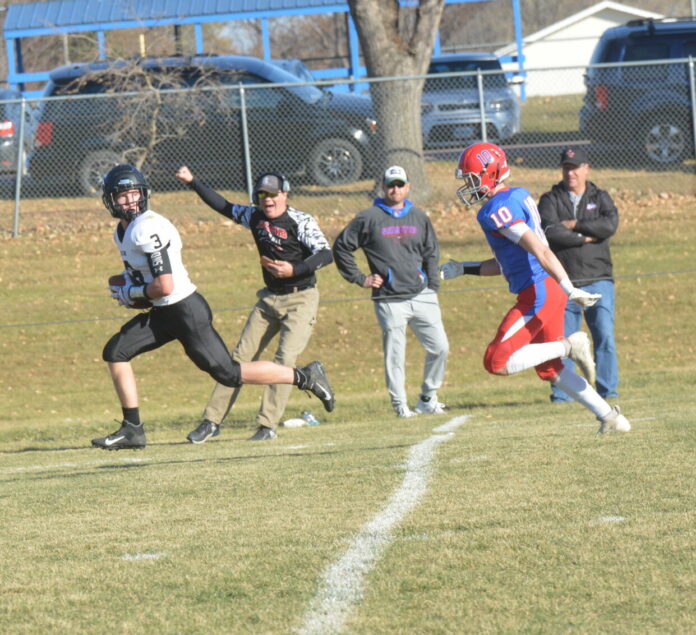 After being shut out by Hills-Beaver Creek in Week 7, Red Rock Central enacted some vengeance Saturday afternoon, knocking the second-seeded Patriots out of the Section 3 Nine-Man playoffs with a 14-6 victory at Hills.

RRC set the tone on its first drive of the game, marching deep into Patriot territory before being turned aside on fourth down. But it was the Falcon defense that proved to be the difference  Saturday, limiting HBC’s scoring chances. HBC had just two possessions cross midfield and only one reach the red zone in the game.

The one red zone trip for HBC got the Patriots on the scoreboard first, as Sawyer Bosch hit Luke Fuerstenberg with a 17-yard touchdown pass. The two-point run failed, giving HBC a 6-0 lead with 1:27 left before halftime.

Late in the quarter, HBC started a drive at midfield and got as far as the Falcon 31, but a fourth-down pass fell incomplete, turning the ball over on downs.

RRC then set out on its best drive of the game, marching 69 yards in 11 plays, with nine of them being runs by freshman Carter Therkilsen. Therkilsen smashed into the end zone from 11 yards out, then tacked on the two-point conversion run, giving the Falcons a 14-6 lead with 8:37 left to play.

RRC’s defense then clamped down, forcing the Patriots to punt, then forcing a turnover on downs. HBC’s final chance ended in an incomplete pass.

Therkilsen carried the load for the Falcon offense, rushing 32 times for 171 yards.

Simonson completed 8-of-16 passes for 98 yards. Vold had four catches for 58 yards in the win.

Mt. Lake Area tied the game late in the first half, then took the lead for good late in the third quarter to defeat Edgerton 45-36 in the Section 3 Nine-Man playoffs in Mt. Lake.

Edgerton’s defense buckled down on MLA’s running game much of the game, but the Wolverines were able to move the chains with an effective air attack and did damage on the ground in the red zone.

Trailing 6-0 after one quarter, the Wolverines got on the board early in the second on a 3-yard Evan Karschnik touchdown run. Jake Evers added the two-point conversion for an 8-6 lead.

Edgerton answered, scoring to go up 14-8, but the Wolverines tied the game late in the half when Jake Evers hit older brother Theo Evers with a 51-yard touchdown strike, tying the game 14-14 at halftime.

The Wolverines then took the lead to start the second half, when Peyton Banks returned the opening kickoff of the half 80 yards for a score. Karschnik’s extra-point kick gave MLA a 21-14 lead.

Edgerton scored late in the quarter on a 10-yard Carter Amundson run, but MLA stopped the two-point try to preserve a 29-28 lead. That proved critical in the fourth quarter.

Cody Rahn stretched the Wolverine lead with a 9-yard touchdown reception from Jake Evers. Evers hit Chase Anacker with the two-point conversion, giving the Wolverines a nine-point lead at 37-28.

Edgerton scored late in the game on a 22-yard pass from Blake Schultz to Bootsma, and cut MLA’s lead to one with a two-point conversion. But with under two minutes to play, MLA recovered the ensuing onside kick. Edgerton then opted to let the Wolverines score on a 53-yard run by Karschnik, hoping to stop the two-point conversion. Instead, Evers smashed in for the two-point try, giving MLA a nine-point lead. The Wolverines then intercepted a pass late, sealing the victory.

Evers completed 15-of-22 passes for 214 yards in the win. Theo Evers had three catches for 73 yards, while Rahn had four catches for 50 yards. Karschnik rushed 10 times for 88 yards, while Evers added 47 yards on 14 carries.