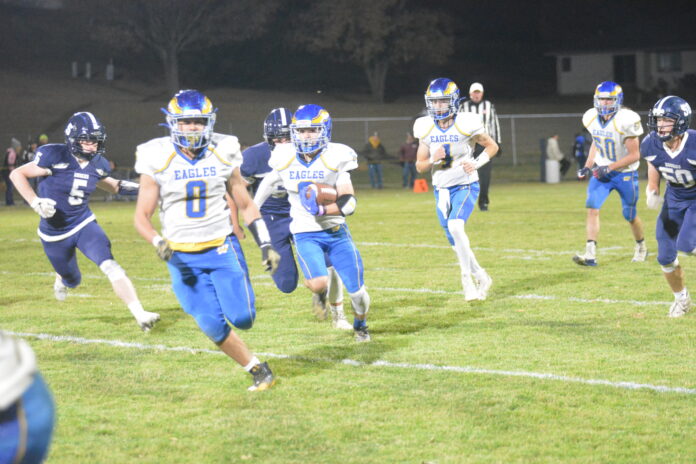 The Windom Eagle football team saw its season end with an 0-9 record Tuesday night, after dropping a 62-28 decision in the Section 3AA playoffs to Jackson County Central in Jackson.

The Eagles had one of their better offensive games of the season, passing for 215 yards and adding another 96 on the ground.

But the Eagle defense struggled to slow down a high-powered JCC offense, which piled up 605 yards of total offense in the game.

Windom did force JCC into a turnover on its first drive of the game, but after an Eagle punt, the Huskies cashed in on a 6-yard Gabriel Wolff touchdown run.

Windom answered, cutting JCC’s lead to 7-6 when Quintin Tietz found Kevin Bleess down the sideline for a 44-yard touchdown.

But the Huskies quickly assumed control of the game, scoring 35 straight points on five consecutive scoring drives. Caleb Vancura caught a 55-yard touchdown pass from Roman Voss for a 14-6 lead after one quarter.

The Eagles were able to trim the deficit to 42-14 at halftime when Tietz hit Bleess for a 14-yard score late in the half. Tietz added the two-point conversion run.

In the second half, JCC stretched the lead to 56-14 on a 23-yard touchdown pass from Brenan Runge to Thomas Freking and a 20-yard Noah Thompson touchdown run.

Tietz gave the Eagles a score early in the fourth quarter on a 24-yard touchdown run.

Windom added the final points of the game when Bleess scored his third touchdown of the game on a 52-yard pass from Charlie Erickson. Erickson hit Elias Jensen with the two-point conversion pass.

Tietz finished with 88 yards rushing on seven carries and completed 21-of-37 passes for 163 yards.

Top-seeded Mt. Lake Area found itself trailing eighth-seeded Heron Lake-Okabena-Fulda late in the first half, but the Wolverines scored a pair of touchdowns in the final minute of the half, taking control of the game and going on to a 28-14 victory in the Section 3 Nine-Man playoffs at Munson Field.

HLOF struck first, scoring on a 2-yard Denver Ash touchdown run. But the Wolverines tied the game at 8-8 late in the first quarter, as Jake Evers scored on a 2-yard run. Evan Karschnik added the two-point conversion.

HLOF regained the lead early in the second on a 2-yard Aiden Lang run, but late in the half, Evers hit Chase Anacker for a 26-yard touchdown. Karschnik’s two-point run gave MLA a 16-14 lead.

The Wolverines then forced a Coyote turnover and converted it into points, as Evers hit Anacker for a 36-yard touchdown strike in the closing seconds of the half. That gave MLA a 22-14 lead.

It stayed that way into the fourth quarter, as MLA was able to hold the Coyotes out of a red zone opportunity.

MLA added the final points of the game when Karschnik scored on a 6-yard run in the closing minutes.

Karschnik rushed 18 times for 96 yards. Evers added 85 yards on 22 carries and completed 9-of-19 passes for 190 yards. Anacker had two catches for 56 yards, while Theo Evers caught four passes for 47 yards.

Red Rock Central wasted little time getting its playoff run to a fast start Tuesday, scoring six first-half touchdowns on its way to a 41-8 win over Westbrook-Walnut Grove in the Section 3 Nine-Man playoffs at Lamberton.

RRC jumped to a quick 12-0 start behind scoring runs of 2 and 1 yards from Carter Therkilsen. Then, late in the first quarter, Isaac Simonson found Jake Jackson for a 12-yard touchdown pass for a 20-0 lead.

Simonson hooked up with Ashton Juhnke early in the second to give the Falcons a 28-0 lead.

WWG scored the only points of the second half on a 26-yard pass from Brady Ross to Dan Kleven and a two-point conversion pass from Kevin Curry to Kole Curry.