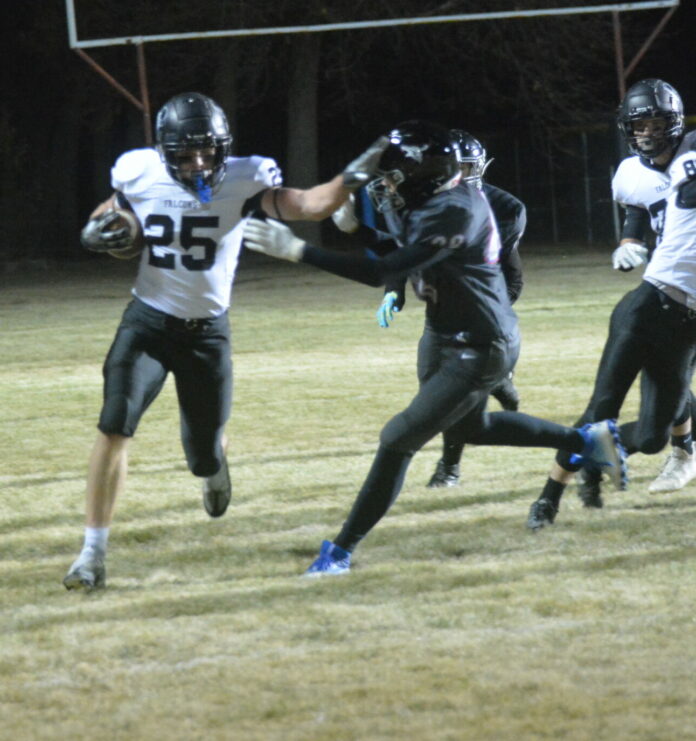 The Windom Eagle football team had its best offensive output of the season, but couldn’t slow down Pipestone’s attack in the first half Wednesday, leading to a 62-28 loss at Pipestone.

The Eagles were able to get on the board in the first quarter when Quintin Tietz hit Kevin Bleess with a 68-yard touchdown pass, cutting the Pipestone lead to 14-6.

But the Arrows reeled off 28 points in the second quarter, turning a pair of Eagle turnovers into points.

Tietz found Karson LaCanne for a 33-yard touchdown late in the first half, but the Arrows scored with eight seconds left in the half to take a 42-12 lead.

Pipestone tacked on 14 points in the third and six in the fourth before the Eagles scored the game’s final two touchdowns.

The Eagles rushed for -4 yards as a team on 12 carries.

Red Rock Central got off to a strong start on offense and withstood defensive struggles in the second half to claim a 35-8 win over Heron Lake-Okabena-Fulda in Heron Lake to close the regular season.

The Falcons cashed in their first drive of the game, going 51 yards in nine plays. Carter Therkilsen scored on a 7-yard run, giving the Falcons a 6-0 lead.

After forcing an HLOF punt, the Falcons were able to run out the rest of the first quarter and score early in the second, when Isaac Simonson hit Jayden Lang for a 12-yard touchdown strike. Simonson found Therkilsen for the two-point conversion and a 14-0 Falcon lead.

Then, after forcing another Coyote punt, the Falcons closed the half with a nine-play, 74-yard drive, capped when Simonson found Lang over the middle for a 19-yard touchdown pass. Quintin Vold’s extra-point kick gave the Falcons a 21-0 halftime lead.

RRC was turned away on its first drive of the second half, running eight offensive plays. They were the only plays the Falcons would run from scrimmage in the quarter. HLOF was able to score on a 14-yard Denver Ash touchdown run and the two-point conversion pass, cutting the Falcon lead to 21-8.

On the ensuing kickoff, Vander Mathiowetz fielded the ball at the Falcon 15 and burst through a gap, broke two tackle attempts and outran the coverage for an 85-yard touchdown return. Vold’s extra point pushed the Falcon lead to 28-8.

HLOF was able to run out the rest of the third quarter clock, driving down to the Falcon 11. But a series of penalties pushed the Coyotes back, and HLOF was stopped short on fourth down.

Late in the game, the Falcons sealed the win, as Jake Jackson scored on a 31-yard run. Vold’s extra point gave the Falcons the 35-8 victory.

Therkilsen rushed 25 times for 173 yards, surpassing the 1,000-yard on the ground for the season. Jackson added 44 yards on four carries.

Simonson completed 8-of-16 passes for 92 yards. Lang had three catches for 41 yards and Mathiowetz had two catches for 37.

Official pairings for the Section 3 Nine-Man Tournament will be announced Thursday.

Mt. Lake Area rattled off its sixth straight win to close the regular season Wednesday night, rolling to a 42-16 victory at Nicollet.

The Wolverines erupted for 29 points in the second quarter, taking a 35-0 halftime lead.

Cody Rahn got MLA on the board in the first quarter on a 6-yard touchdown run.

In the second, Jake Evers tacked on a 1-yard sneak for a 12-0 lead. Evan Karschnik then scored on a 2-yard run and added the two-point conversion, stretching the lead to 20-0.

Rahn scored on a 7-yard run to give the Wolverines a 28-0 lead, and Karschnik scored on a 5-yard run late in the half and kicked the extra point for a 35-0 lead.

In the third quarter, Ethan Rahn scored from eight yards out and Karschnik added the PAT for MLA’s final points of the night.

Nicollet scored a pair of touchdowns in the fourth quarter.

Evers rushed 12 times for 97 yards in the win. Karschnik tacked on 56 yards on 14 carries and Ethan Rahn had 49 yards on eight carries. Cody Rahn had three catches for 33 yards. Evers completed 4-of-7 passes for 39 yards.