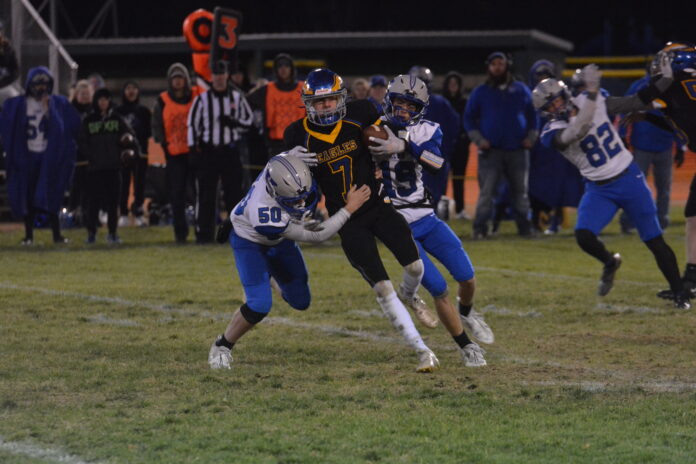 The Windom Eagle football team dropped to 0-7 for the season Friday night with a rough homecoming outing, falling 48-8 to Lake Crystal-Wellcome Memorial at Island Park.

The Knights battered the Eagles on the ground, rushing for 389 yards on 37 carries for the game.

LCWM got the scoring going on its first drive of the, marching 75 yards in just five plays, capped with a 27-yard touchdown run by Isaiah Hernandez.

The Knights pushed the lead to 12-0 on a 15-yard Jack Goeringer touchdown run late in the first quarter.

The Eagles were able to put together their best drive of the night late in the first quarter, marching 75 yards in 10 plays. On fourth down from the LCWM 31, quarterback Quintin Tietz scrambled and flipped a pass over a Knight defender to Tucker Renquist for a 31-yard touchdown. Bryan Macario scored the two-point conversion on a shovel pass from Tietz, cutting the deficit to 12-8 on the final play of the first quarter.

But it was all Knights after that, as LCWM scored 36 unanswered points over the final three quarters. Goeringer scored on a 4-yard touchdown run to put LCWM up 20-8 at halftime.

On the opening drive of the third quarter, LCWM needed just three plays to score on a 14-yar pass from Nathan Sickler to Drew Dahl, stretching the lead to 28-8.

After forcing an Eagle turnover on downs, LCWM converted on a short scoring drive, as Michael Matteson scored on a 9-yard run for a 35-8 lead.

Goeringer scored his third touchdown of the game early in the fourth quarter, putting the Knights up 42-8. Then, after an interception by the Eagles, LCWM scored on the very next play, as max Magnus raced 65 yards for the final points of the night.

Kevin Bleess led the Eagles on the ground, rushing three times for 21 yards.

Tietz completed 11-of-25 passes for 74 yards. Bleess had five catches for 23 yards. Macario had four catches for 43 yards.

Evers hit Alex Blom with scoring strikes of 20 and 30 yards to give the Wolverines a quick 16-0 lead. MLA stretched the lead to 18-0 when Kole Haberman recorded a sack for a safety.

After the ensuing free kick, Cody Rahn raced 42 yards untouched for a 26-0 lead. Then, after a Madelia punt, Evers hit Chase Anacker with a 29 yard touchdown pass for a 33-0 lead.

Rahn added a 1-yard touchdown run early in the second quarter and Evan Karschnik scored on a 2-yard run for MLA’s final points of the night.

Madelia scored on a 63-yard Eric Anderson touchdown run in the third quarter.

Karschnik rushed seven times for 69 yards in the win. Rahn added 65 yards on four carries and had two catches for 57 yards.

Hills-Beaver Creek was able to stifle the Red Rock Central offense Friday night, as the Patriots claimed a 22-0 victory at Lamberton.

RRC was held to roughly 100 yards of offense for the game and did not record a first down in the first half.

That allowed HBC to efficiently build a lead on the ground, as Sawyer Bosch scored on runs of 1, 5 and 2 yards to account for all of HBC’s touchdowns.

Carter Therkilsen rushed 14 times for 53 yards in the loss.