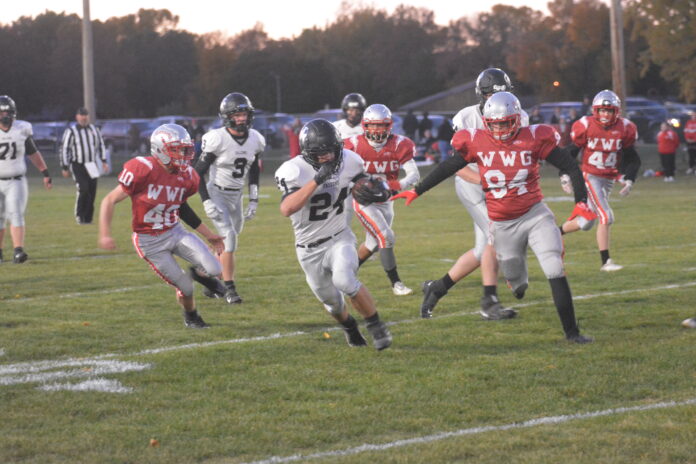 The Windom Eagle football team struggled to stop drives in the first half Friday night, as Redwood Valley ran to a 28-8 victory over the Eagles at Redwood Falls.

The Cardinals built a 19-0 halftime lead on a pair of short touchdown runs and a 33-yard touchdown run. Meanwhile, Windom’s offense struggled to find its footing early in the contest, as the Cardinals dominated time of possession.

Redwood added a 19-yard touchdown run, then kicked a 34-yard field goal in the third quarter, taking a 28-0 lead.

The Eagles broke the shutout in the fourth quarter when Stevie Meyer scored on a 5-yard touchdown run. Adam Perrizo caught the two-point conversion pass from Quintin Tietz.

Tietz finished the game with 81 yards on 9-of-26 passing. He also rushed for a team-high 21 yards on four carries. Tucker Renquist had three receptions for 21 yards.

Red Rock Central jumped to a quick early lead, then the defense clamped down in the second half to preserve a 56-28 victory over Westbrook-Walnut Grove Friday in Westbrook.

The Falcons scored on their first drive of the game, as Jake Jackson scored on a 4-yard run. WWG then fumbled on the ensuing kickoff with RRC recovering. Moments later, Vander Mathiowetz pulled in a 9-yard touchdown pass from Isaac Simonson for a 12-0 lead.

Quintyn Vold gave the Falcons a 20-0 lead early in the second, scoring on an 11-yard run.

But the game was back-and-forth for the rest of the first half. WWG scored on a 41-yard pass from Brady Ross to Luke DeSmith, but RRC answered as Jayden Lang pulled in a 10-yard scoring strike from Simonson. WWG capped the scoring for the half when Ross was on the receiving end of a 13-yard pass from Kole Curry, making the score 28-15.

The back-and-forth continued to start the second half, as RRC struck quickly. Carter Therkilsen broke off a run of 63 yards, then scored on the next play on a 3-yard run.

But WWG answered, scoring on a 19-yard pass from Ross to Dan Kleven, cutting the Falcon lead to 34-21.

But the Falcon defense stiffened after that, holding WWG without an offensive touchdown the rest of the way.

Therkilsen gave the Falcons a 40-21 lead on a 1-yard touchdown run. Then, early in the fourth quarter, Therkilsen intercepted a pass by Ross, returning it 78 yards for a touchdown.

Simonson capped the Falcon scoring with a 1-yard sneak late in the game. WWG got the final touchdown when Curry returned the ensuing kickoff 70 yards for a touchdown.

Therkilsen finished the game with 28 carries for 274 yards. Jackson added 34 yards on 10 carries.

Simonson completed 13-of-22 passes for 93 yards. Mathiowetz had six catches for 42 yards in the win.

Mt. Lake Area shook up the standings in Section 3 Nine-Man Friday night, pulling off a stunning 19-12 victory over Hills-Beaver Creek at Hills.

Trailing 6-0 in the second quarter, the Wolverines took the lead when Evan Karschnik burst through the line and outraced the Patriot defense for a 68-yard touchdown run. Karschnik added the extra-point kick for a 7-6 lead.

After forcing a Patriot punt, Karschnik gave the Wolverines a 13-6 lead on a 15-yard touchdown run.

HBC’s Jamin Metzger scored on his second 1-yard sneak of the game late in the first half, cutting the Wolveirne lead to 13-12.

But early in the third quarter, the Wolverines got insurance, as Jake Evers scored on a 20-yard run.

The Wolverine defense then stiffened the rest of the way, coming up with a goal line stand in the closing seconds of the game to preserve the victory.

Karschnik finished with 149 yards rushing on 14 carries. Evers added 25 carries for 77 yards and completed 3-of-11 passes for six yards.