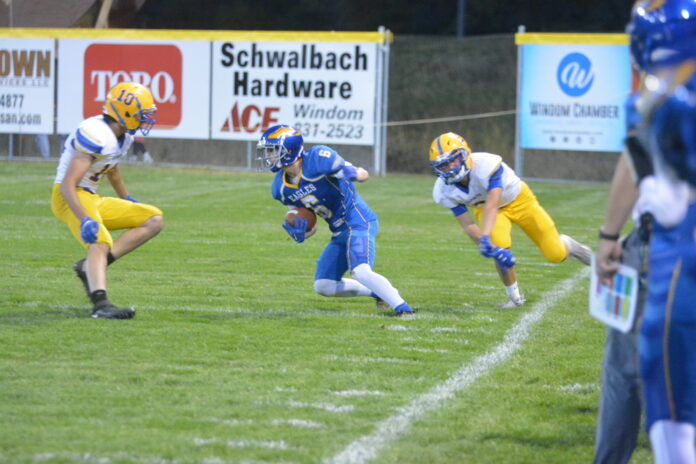 The Windom Eagle football team jumped out to a fast start Friday night, but the offense and defense both wore down in the second half, allowing LeSueur-Henderson to rally for a 30-16 victory at Island Park.

The Eagle offense was held to two first downs in the second half. Meanwhile, the Giants put together three lengthy scoring drives in the final 24 minutes, dominating time of possession for the game.

The Eagles struck first in quick fashion. After forcing a punt on LSH’s first drive, Windom covered 95 yards in just four plays, scoring on an 80-yard bomb from Quintin Tietz to Tucker Renquist. The two-point pass from Tietz to Karson LaCanne gave the Eagles a quick 8-0 lead.

LSH answered by churning out yardage in small chunks, eventually scoring on a 6-yard touchdown run by Brody Berndt. The extra point kick cut the Eagle lead to 8-7.

Windom put together a sustained drive of its own after a touchback on the ensuing kickoff. Windom marched 80 yards in 11 plays, capped with a 1-yard touchdown run by Tietz. Tietz hit Bryan Macario for the two-point conversion, giving the Eagles a 16-7 lead.

But LSH methodically churned out most of the second quarter, capping a drive with a 29-yard field goal by Ethan Hathaway, cutting the Eagle lead to 16-10 at halftime.

After the two teams traded punts to start the second half, the Giants held the Eagles on a fourth down conversion attempt near midfield. That set up a 4-yard touchdown pass from Berndt to Connor Schultz. The extra point kick gave LSH a 17-16 lead.

After the Eagles were held to a three-and-out, LSH ground out the rest of the third quarter, scoring with eight minutes left in the game on a 1-yard sneak by Berndt for a 23-16 lead.

Then, LSH stopped the Eagles on another fourth down conversion attempt, setting up a short scoring drive capped with Berndt’s third touchdown run of the game, covering one yard for a 30-16 win.

Abe McKibbin rushed nine times for 45 yards in the loss. Tietz completed 9-of-22 passes for 172 yards. Renquist had two catches for 101 yards while Kevin Bleess had three catches for 46 yards. Elias Jensen had four catches for 25 yards.

Mt. Lake Area battered Heron Lake-Okabena-Fulda on the ground Friday night, rolling to a 53-18 victory over the Coyotes at Mt. Lake.

The Wolverines had two 100-yard rushers and gained over 420 yards on the ground for the game.

MLA scored first as Jake Evers scored on a 25-yard run, but HLOF answered with a touchdown pass late in the first quarter, tying the game at 6-6.

The Wolverines then pulled away in the second. Cody Rahn scored on runs of 38 and 20 yards, while Evan Karschnik scored on a 2-yard run for a 28-6 halftime lead.

Karschnik added another 2-yard touchdown early in the third quarter and Rahn scored on a 4-yard pass from Evers, stretching the Wolverine lead to 40-12 after three quarters.

Evers tacked on a 1-yard touchdown run and Layne Wall capped the scoring with a 45-yard run.

Evers completed 4-of-7 passes for 28 yards. Rahn and Karschnik each had two receptions in the win.

Cedar Mountain’s offense wore down the Red Rock Central defense Friday night, as the Cougars spoiled the Falcons’ homecoming night with a 22-13 victory at Lamberton.

RRC raced to a quick 13-0 lead. Carter Therkilsen scored on a 3-yard run in the first quarter. Jake Jackson added a 1-yard scoring plunge early in the second quarter.

But it was all Cougars after that, as Cedar Mountain held the Falcons to 12 offensive plays in the second and third quarters combined.

Cooper Freitag scored on a 3-yard run, cutting the Falcon lead to 13-6 at halftime. Then, after pinning the Falcons in their own end, the Cougars scored a safety when RRC’s punt snap sailed out of the end zone.

Freitag gave the Cougars the lead early in the fourth on a 1-yard run before Christian Belcher scored on a 7-yard run, sealing the win for Cedar Mountain.

Therkilsen rushed 21 times for 84 yards in the loss. Isaac Simonson completed 11-of-28 passes for 103 yards. Jayden Lang had three catches for 34 yards.