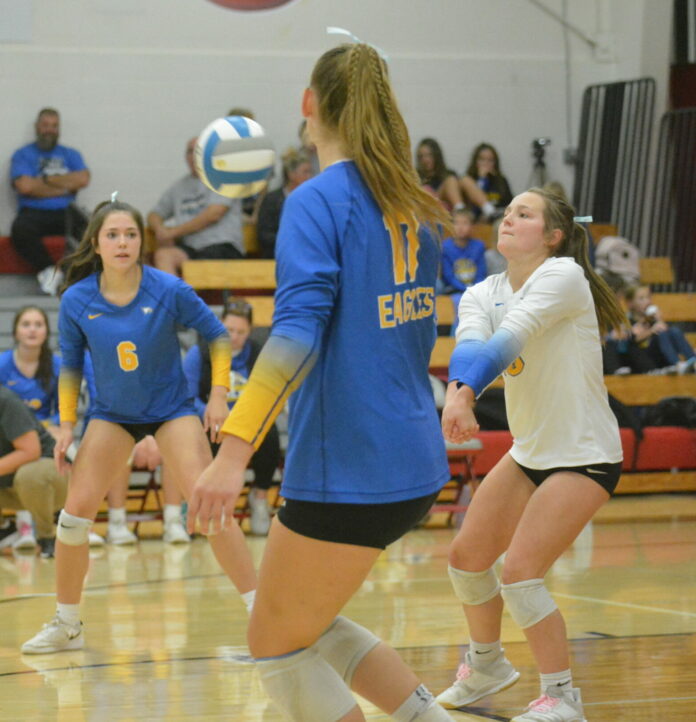 The Windom Eagle volleyball team shook off a rough start Thursday night, rallying for a 3-1 victory over Westbrook-Walnut Grove at Westbrook.

Windom started the match with a 7-0 run, only to see the Chargers rally and eventually take the opening set 25-19. WWG then raced to an early lead in the second set, but the Eagles regrouped behind improved serving and passing. Windom fought off a set point trailing 24-23 and scored the final three points to win the set 26-24.

Hadley Sammons led the Eagles at the service line, going 23-of-23 with five aces. Makenna McNamara went 15-of-16 with two aces.

Tristyn Maras paced the Eagles at the net with 16 kills. Leah Hauge added seven kills, while Elliot Espenson and Kameron Rupp had six kills each.

McNamara had a team-high 26 set assists. Maras led the way with 13 digs.

Red Rock Central fought off elimination with a third-set victory but couldn’t keep up that momentum Thursday night, dropping a 3-1 decision at Edgerton.

After the Dutchmen won two close sets to open the match, RRC regrouped, taking the third set 25-18. But Edgerton pounded away at the middle of the net, pulling away from the Falcons to close out the win 25-17.

Maia Scheffler went 13-of-14 serving with three aces. Rindfleisch and Reilly Hubin were each 18-of-18 with two aces.

Next matches: Check for updates after each match.
Windom: vs. Redwood Valley, Oct. 4
MLAC: at St. Clair Tourney, Oct. 1
RRC: vs. Springfield (at Lamberton), Sept. 30