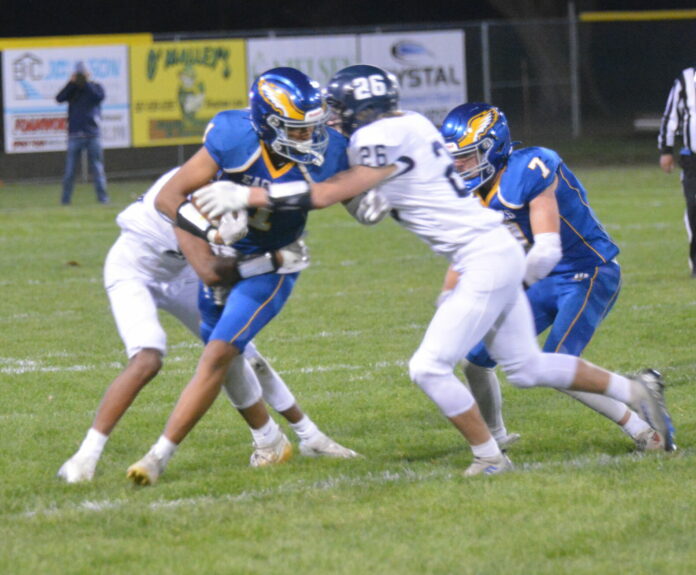 Big plays proved to be the Windom Eagles’ downfall Friday night, as the Eagles fell 48-6 to Jackson County Central at Island Park, dropping to 0-4 for the season.

JCC averaged over 10 yards per play on the ground for the game and racked up 462 yards of offense in just 42 offensive snaps.

The Huskies struck quickly, scoring on the second play from scrimmage on a 57-yard Roman Voss run.

After the Eagles were stopped on fourth down near midfield, JCC needed just three plays to score, as Voss hit Bryson Powers for a 32-yard touchdown and a 14-0 lead.

After an Eagle interception, the Huskies scored on their next play, as Voss hit Gabriel Wolff for a 15-yard touchdown pass. Less than five minutes into the game, JCC led 21-0.

After an Eagle punt, the Huskies marched into Windom territory again, but Kevin Bleess jumped in front of a pass for an interception, returning it to the JCC 43-yard line.

A 41-yard completion from Quintin Tietz to Tucker Renquist set up Windom’s only touchdown of the game, as Abe McKibbin smashed into the end zone from two yards out, making the score at the time 21-6.

JCC took the ensuing possession and scored on a six-play, 62-yard drive, capped with a 13-yard Wolff touchdown run.

After an Eagle punt, JCC needed just two plays to score, as Seth Stai scored on a 9-yard run. Then, after Windom was stopped on fourth down, JCC scored on another two-play drive, as Voss scored on a 48-yard run for a 42-6 lead.

After the Eagles threw an interception on the second play of the second half, JCC scored on a five-play drive, capped by an 11-yard touchdown run by Stai for the game’s final points.

Tietz led the Eagles on the ground with 46 yards on five carries. Jackson Anderson added 22 yards on two carries.

Red Rock Central scored on its first two possessions and never looked back Friday night, rolling to a 28-8 victory over Edgerton at Lamberton.

The Falcons took the opening kickoff an marched 16 plays in six minutes. Jake Jackson capped the scoring drive with a 2-yard touchdown run for a 6-0 lead.

After forcing a three-and-out, the Falcons struck quickly on their next play, as Isaac Simonson hit Vander Mathiowetz for a 74-yard touchdown. Simonson found Jayden Lang for the two-point conversion, making the score 14-0.

Early in the second quarter, the Falcons stretched the lead to 20-0 when Simonson found Mathiowetz for a 41-yard touchdown strike.

Then, early in the third quarter, the Falcons ran the lead to 28-0 when Simonson and Mathiowetz hooked up for the third time in the game for a 35-yard touchdown. The two added the two-point conversion for a 28-0 lead.

Edgerton scored its only touchdown of the game on the first play of the fourth quarter, when Chase Bootsma scored on a 35-yard run. Bootsma added the two-point conversion.

Simonson completed 11-of-17 passes for 211 yards. Mathiowetz had four catches for 158 yards and three scores. Carter Therkilsen rushed 26 times for 107 yards in the win.

Mt. Lake Area had its best offensive showing of the season to date and dominated in all three phases of the game, surging to a 45-14 victory over reigning state champion LeRoy-Ostrander Friday in Mt. Lake.

The Wolverines were able to get their ground game going against the Cardinals, with two Wolverines finishing with over 100 yards on the ground.

MLA got on the board first, scoring when Jake Evers hit Cody Rahn for a 12-yard touchdown strike. The extra-point kick attempt failed, leaving the score at 6-0.

MLA forced the Cardinals to punt on their next possession and blocked the punt. Treyton Duerksen scooped up the ball and rumbled 38 yards for a touchdown. Evers added the two-point run for a 14-0 lead.

LO cut the deficit to 14-8 on the final play of the half, when Camden Hungerholt scrambled out of the pocket and down the sideline for a 34-yard touchdown run. The two-point conversion was good.

MLA didn’t let the Cardinals carry momentum into the second half, though, as Evers scored on a 46-yard run on MLA’s first possession of the half.

After another partially-blocked punt, the Wolverines scored on a 7-yard Rahn touchdown run. Then, after a Cardinal three-and-out, the Wolverines drove deep into LO territory, with Evers scoring on a 1-yard sneak.

Then, after another LO punt, the Wolverines put the game away, as Rahn burst up the middle for a 71-yard touchdown run. Evan Karschnik’s extra point kick gave MLA a 39-8 lead.

Evers finished with 180 yards rushing on 23 carries and completed 5-of-8 passes for 55 yards. Rahn added 111 yards on the ground on just five carries, and had three catches for 32 yards.