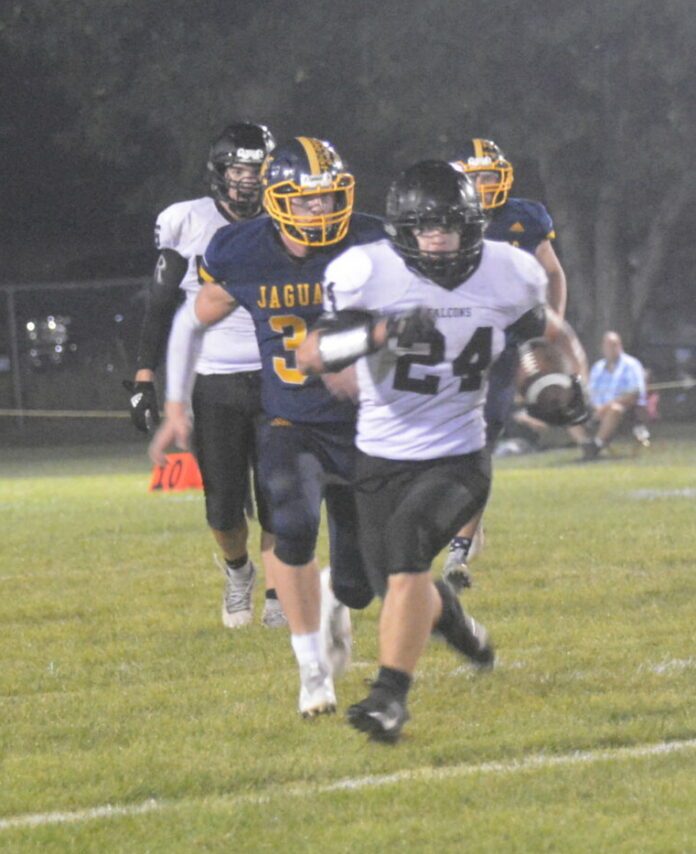 The Windom Eagles fell to 0-3 on the season Thursday night, dropping a lightning-shortened 36-0 decision at Luverne.

The game went into a delay early in the third quarter when lightning and heavy rain rolled into the Luverne area. When the radar indicated the rain wouldn’t let up for some time, the decision to call the game was made.

Luverne held the Eagles to 88 yards of total offense for the game, with Windom gaining no yardage on the ground on eight rushing attempts.

Luverne raced to the lead on the first drive of the game when quarterback Conner Connell hit Kaleb Hein for a 3-yard touchdown pass. The two-point conversion gave the Cardinals an 8-0 lead.

Luverne forced a pair of three-and-out possessions for the Eagles, turning each into a quick touchdown. Gavin DeBeer scored on a 72-yard run and Connell added an 18-yard touchdown run.

Then, after the Eagles failed to convert a fourth down try, Luverne scored when Carter Sehr hit Connell with a 28-yard touchdown pass for a 29-0 lead after one quarter.

Windom’s best drive of the game came in the second quarter, when the Eagles moved into Cardinal territory, but threw an interception in the end zone to halt the drive. Luverne cashed in for the final points of the game on a 48-yard run by Connell.

The game was called after just two plays in the second half due to lightning.

Quintin Tietz completed 10-of-19 passes for 88 yards. Tucker Renquist had one catch for 31 yards while Bryan Macario had three catches for 29 yards.

Red Rock Central had chances fall by the wayside Friday night as the Falcons took their first loss of the season, falling 19-13 in overtime to Renville County West at Danube.

Including overtime, the Falcons had four drives inside the Jaguar 30-yard line that didn’t result in points.

RCW got on the board first. After holding the Falcons to a three-and-out to start the game, the Jaguars marched 61 yards in 14 plays, capped with a 5-yard touchdown pass from AJ Gasca to Isaac Haen. The extra point kick gave the Jaguars a 7-0 lead.

RCW then closed out the half strong, scoring on a 3-yard Jasen Jansen run with three seconds to go before halftime. The PAT kick failed, leaving the score 13-0.

RRC found its offensive rhythm in the second half. After stalling out after marching into the red zone, the Falcons then forced RCW into a three-and-out. A 42-yard Carter Therkilsen run set up a 5-yard touchdown pass from Isaac Simonson to Vander Mathiowetz. Quintyn Vold’s extra point kick cut the deficit to 13-7.

The Falcons forced punts on RCW’s next two drives, but stalled out at the Jaguar 29 before having a three-and-out. But after a Jaguar punt went for a touchback late in regulation, the Falcons quickly moved downfield. Simonson hit Mathiowetz for a 72-yard completion. The two then hooked up again for a 4-yard touchdown with 1:15 left in regulation. But the Falcons’ PAT kick attempt was blocked, leaving the score tied at 13-13.

In overtime, RRC was held out of the end zone on fourth down. After a sack on RCW’s first play, the Jaguars ended the game when Gasca hit Haen for a 15-yard touchdown.

Therkilsen rushed 17 times for 90 yards in the loss. Simonson completed 9-of-21 passes for 122 yards. Mathiowetz had three catches for 81 yards.

Late heroics lifted Mt. Lake Area to its first victory of the season Friday night, as the Wolverines rallied for an 18-14 victory at Edgerton.

MLA got on the scoreboard first, scoring late in the first half on a 1-yard Jake Evers touchdown run. MLA led 6-0 at the half.

Edgerton scored in the third quarter on a 5-yard pass from Blake Schultz to Chase Bootsma. The two-point conversion gave the Dutchmen an 8-6 lead.

The Wolverines answered early in the fourth, as Theo Evers reeled in an 18-yard touchdown pass from Evan Karschnik, giving MLA a 12-8 lead.

Edgerton marched down the field with time winding down, scoring on a 1-yard plunge by Carter Amundson to take a 14-12 lead with under a minute to go.

But on the ensuing kickoff, Karschnik fielded the kick, broke two tackles and outsprinted the Dutchmen coverage, scoring a 72-yard kickoff return touchdown to give the Wolverines the victory.

Evers completed 3-of-19 passes for 63 yards, while Karschnik completed 2-of-2 passes for 34. Theo Evers had two catches for 50 yards in the win.