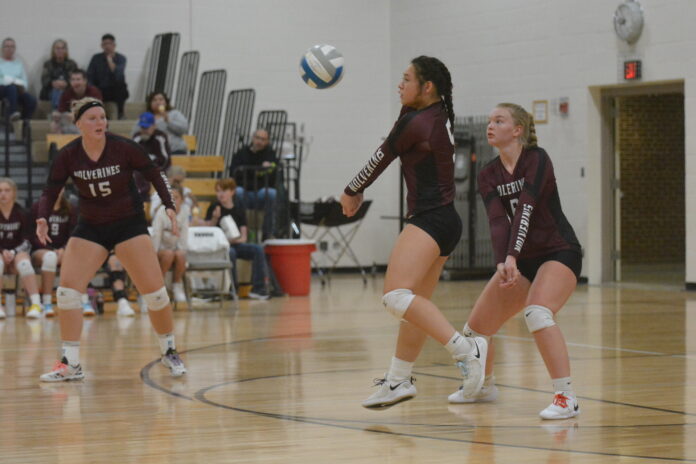 The Eagles and Arrows locked in a tight opening set before Pipestone scored a string of points late, taking a 28-26 win. The Arrows carried that momentum into a second game 25-18 win.

In the third set, the Eagles again had an early lead before Pipestone roared back, closing out the match with a 27-25 victory.

Hadley Sammons led the Eagles at the service line, going 18-of-18 with three aces. Kadyn Paulson was 16-of-16 with an ace and Charlee Huska was 11-of-12 with an ace.

At the net, Tristyn Maras led the Eagles with 13 kills. Elliot Espenson added five kills and Hannah Dauer had four.

Red Rock Central battled back after a tight first-set loss Tuesday, but couldn’t sustain its momentum, dropping a 3-1 decision to Westbrook-Walnut Grove at Lamberton.

WWG won the opening set before the Falcons battled back, rallying late in set two before eventually winning 27-25.

But the Chargers regained control in the third set, pulling away to win 25-16, then holding off a late Falcon rally in set four to win 25-22.

Emily DeCock finished with 26 set assists and had a team-high 15 digs. Erickson and Maia Scheffler each had 14 digs.

The Wolverines rallied from three points down late in the opening set, eventually winning 27-25. But the Dragons answered, seizing momentum with a 25-17 win in set two. AE pulled away late to win the third set, then built a comfortable lead to win the fourth set.

Next matches: Check for updates after each match.
Windom: at Luverne, Sept. 15
MLAC: at Edgerton, Sept. 15
RRC: at JCC Tourney (Jackson), Sept. 17