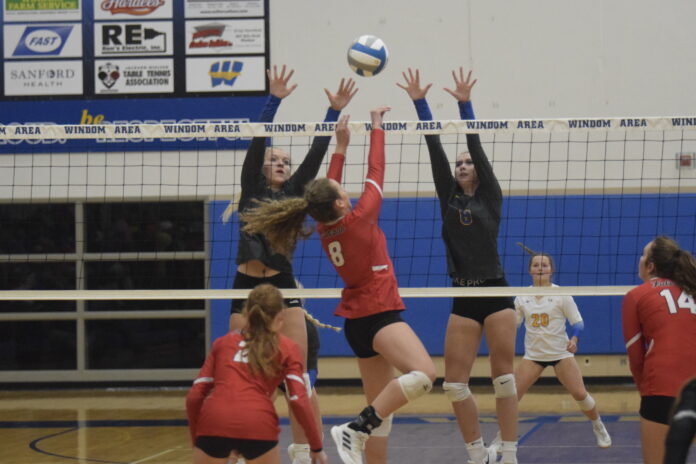 A strong night at the service line propelled the Windom Eagle volleyball team to a 3-0 sweep over Red Rock Central Tuesday in Windom.

The Eagles fired 16 ace serves as a team. Meanwhile, the Falcons never got on track offensively or from the service line, finishing with 10 service errors.

The Eagles pulled away in the middle of the first set behind a strong service run from Hadley Sammons, who finished 18-of-18 for the match with three aces.

Charlee Huska sparked a surge in the second set, finishing 16-of-17 with five ace serves. Makenna McNamara and Elliot Espenson each added a trio of aces and Kadyn Paulson had two aces.

The Falcons were able to keep the third set close before Windom pulled away late for the win.

For the Falcons, Callie Highby, Josie Horning and Sondra Rindfleisch each had two kills. Jadyn Steen was 6-of-8 serving with an ace, while Maia Scheffler was 7-of-8 with an ace. Emily DeCock had five set assists. Scheffler finished with 12 digs.

After a slow start, Mt. Lake Area-Comfrey came on strong late, but Cleveland was able to rally in the fourth set to claim a 3-1 victory over the Wolverines Tuesday at Comfrey.

Cleveland cruised to victory in the first two sets, but the Wolverines regrouped with an improved performance from the service line to win set three. The Wolverines then jumped to an early lead in set four and were on the cusp of sending the match to a deciding fifth set before Cleveland rallied for a 29-27 win, closing out the match.

Brooke Naas finished with a team-high 10 kills. Morin added nine and Wuertz and Alexis Romsdahl had six kills each.

Tollefson finished with 27 set assists and a team-high 19 digs.