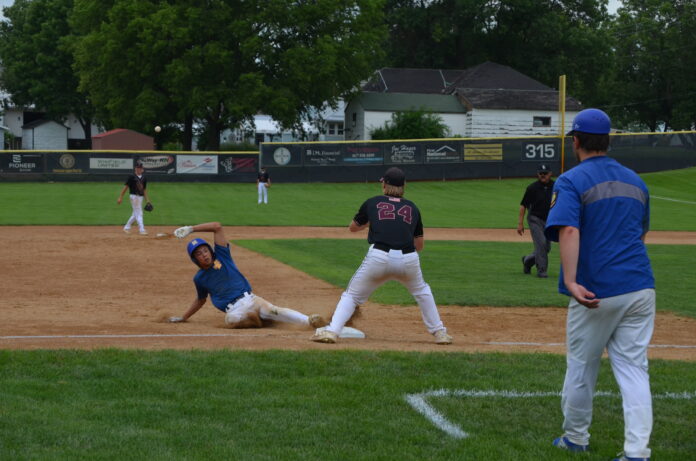 Windom couldn’t capitalize on numerous scoring chances and saw a late rally fall short, as Sr. Legion Post 206 bowed out of the Southwest Sub-State playoffs with a 3-2 loss to Russell-Tyler-Ruthton Saturday in St. James.

RTR got on the board with a pair of runs in the top of the first and led 3-0 going to the last inning.

Post 206 was victimized by a double play ball early in the game, then had a runner thrown out at the plate in the fifth.

In the bottom of the seventh, Post 206 mounted a rally. Quintin Tietz hit a two-run single, driving in both Windom runs. But the game ended when a runner was thrown out at the plate trying to score on a Braydon Kreofsky single.

Kreofsky and Chayton Struck each had two hits in the loss.

Struck took the pitching loss, allowing five hits and no earned runs. He walked one and struck out two.

The Windom Sr. Legion Post 206 baseball team kept its season alive Friday with a 6-3 victory over Blue Earth-Winnebago in the Southwest Sub-State Tournament at St. James.

Windom jumped to an early lead in the game, scoring in the second inning on a Brady Espenson RBI double.

In the third, Drew Rothenberger added a two-run double for a 3-0 lead.

Leading 3-1 going to the sixth, Post 206 put the game away. Tucker Renquist laced an RBI triple, Quintin Tietz plated a run on a squeeze bunt and Rothenberger hit an RBI double.

Rothenberger had three hits. Hunter Palm had two hits in the win.

A dominant performance from Drew Rothenberger led to a commanding 7-0 victory over Pipestone for the Windom Jr. Legion Post 206 baseball team Sunday night in Pipestone.

Rothenberger had three hits and two RBI at the plate. He also pitched a complete-game one-hit shutout, striking out seven.

Rothenberger got Post 206 on the board with an RBI single in the first. Windom added a run on a throwing error in the second and scored on a passed ball in the third.

In the fifth, Rothenberger added an RBI triple and scored on a Hunter Palm sacrifice fly.
Windom added a run on an error and a Hayden Tietz RBI single in the sixth.

Tucker Renquist and Tietz added two hits each in the win.

Post 206 answered each score by Springfield early in the game, as both teams scored runs in the first and third innings.

In the first, Windom scored on a Tucker Renquist sacrifice fly. Drew Rothenberger had an RBI groundout in the third.

Springfield took a 3-2 lead in the fifth, but Windom answere4d with a four-run inning. Quintin Tietz hit an RBI singole and scored on a Rothenberger triple. Hunter Palm added an RBI single and Charlie Erickson hit an RBI double.

Windom’s final run scored on a Tietz triple in the sixth.

Quintin Tietz had four hits and two RBI in the win. Hayden Tietz added a pair of hits.

Palm picked up the pitching win, working the first 6-1/3 innings. He scattered eight hits, walked three and struck out five.

The winners of the first and second games last night will play in the championship series tonight (Wednesday), starting at 5 p.m., at Pipestone A’s Field. A second game, if necessary, immediately follows to determine the overall champion.