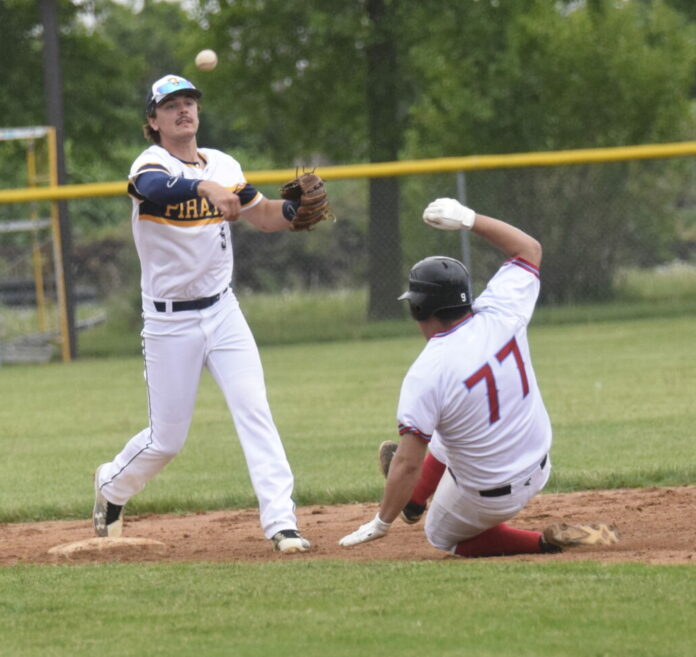 The Windom Pirates needed some late heroics Sunday afternoon to salvage a split of a pair of road games.

Windom opened the day by taking its first loss of the season, dropping a 6-1 decision at Hadley.

The Pirates tied the game at 1-1 in the top of the third on a Noah Kloss sacrifice fly. But Hadley scored three runs in the bottom of the third, taking the lead back for good. The Buttermakers tacked on two insurance runs in the sixth inning.

Kyle Espenson had two hits in the loss for the Pirates.

In the nightcap, the Pirates trailed Heron Lake 3-2 going into the top of the seventh inning, but a two-out, two-run home run from Drew Rothenberger gave the Pirates a 4-3 victory over the Lakers at Heron lake.

Windom opened the scoring with a Kloss RBI double in the top of the first inning.

Heron Lake tied the game in the third, but Windom regained the lead in the fifth on an RBI single from Rothenberger.

Heron lake scored two runs in the bottom of the fifth, taking a 3-2 lead.

In the seventh, Heron Lake quickly got two outs, but a pinch-hit single from Alex Fink kept the game alive, and Rothenberger launched a 2-2 pitch over the left field fence for his first amateur baseball home run.

Rothenberger had three hits in the win for the Pirates.

Luke Gilbertson worked the first six innings to earn the pitching win. He allowed eight hits, walked one and struck out six. Collin Lovell struck out the side in the bottom of the seventh for a save.

The Mt. Lake Lakers dug an early hole Sunday and couldn’t climb out in a 7-1 loss at Heron Lake.

Heron Lake plated three runs in the bottom of the first inning, using a bases-loaded walk and two RBI singles to get on the board.

Meanwhile, Mt. Lake left 12 runners on base in the game, including leaving the bases loaded twice.

The lone Laker run scored on a Jacob Brey RBI single in the fifth inning.

Lucas Anderson and Zach Spinks had two hits each in the loss.

Next games: Check for updates after each game.
Windom: vs. Luverne, June 8
Mt. Lake: vs. Cleveland (at St. James), June 8