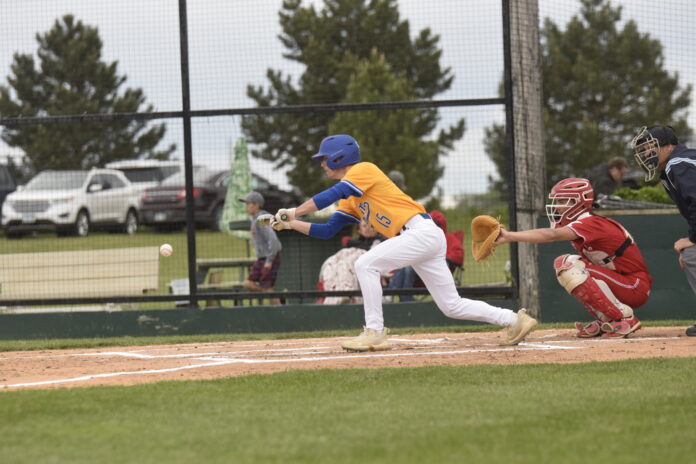 The Windom Eagle baseball team couldn’t get its offense going Tuesday night as the Eagles dropped a 6-1 decision to Luverne in the Section 3AA playoffs at Milroy’s Irish Yard.

The loss ends the Eagles’ season with a 16-6 overall record.

Things started well for the Eagles in the top of the first inning. Drew Rothenberger led off the game by beating out an infield single and promptly stole second. Josh Garrison then put down a sacrifice bunt, but reached safely when the Cardinals failed to cover first base. The Eagles then attempted a double steal, with Garrison eventually being tagged out in a rundown while Rothenberger scored, giving Windom a 1-0 lead.

But the Eagle offense was silent after that, as Luverne pitcher Kaden Anderson retired 19 consecutive batters before Henry Erickson hit a two-out double in the top of the seventh.

Meanwhile, the Cardinals tied the game on a fielder’s choice grounder in the second, then broke the game open with a four-run third inning, stringing together five hits in the inning. Luverne added its last run on an error in the fourth inning.

Rothenberger took the pitching loss for the Eagles, working the first four innings. He allowed six runs on eight hits, walked one and struck out four.

Red Rock Central/Westbrook-Walnut Grove kept its season alive Tuesday, rolling to a 10-0 victory over Tracy-Milroy-Balaton in the Section 3A playoffs at Milroy’s Irish Yard.

The Falcons scored seven runs in the bottom of the third inning, then ended the game with three more runs in the fifth.

Ashton Juhnke had three hits in the win for the Falcons. Knakmuhs added a pair of hits.

Next games: Check for updates after each game.
RRC/WWG: vs. LQPV (at Milroy Yankee Field), June 2