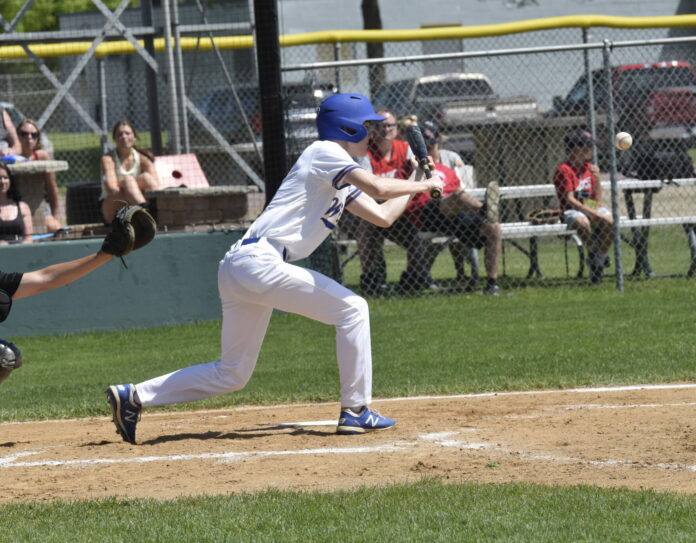 Momentum turned against the Windom Eagle baseball team during the Section 3AA playoffs at Island Park, which left the Eagles on the brink of playoff elimination.

In the opening game of the tournament, the Eagles saw the momentum start to slip late, as St. James nearly completed a remarkable comeback. As it was, the Eagles were able to strand the potential tying run at third, preserving a 9-8 victory.

But Redwood Valley picked up where St. James left off in the second game, scoring five runs in the top of the first inning to put the Eagles in a hole they couldn’t climb out of.

The Cardinals claimed a 12-3 victory, knocking the Eagles to the elimination portion of the tournament.

Against St. James, the Eagles took command early. In the first inning, Brady Espenson hit an RBI single and Cody Hockel launched a bases-clearing double, giving the Eagles a 4-0 lead.

Windom stretched the lead to 6-0 on a Braydon Kreofsky RBI double and a Henry Erickson safety squeeze bunt.

St. James answered with single runs in the third and fifth, but Windom seemed to put the game out of reach with a three-run fifth. Espenson hit a two-run single and scored on a Noah Armstrong single.

But in the top of the seventh, St. James capitalized on four hits and a trio of Eagle errors to plate six runs. The Saints had the potential tying run on third and the go-ahead run on first when a hard grounder to third was played cleanly by Kreofsky, who fired to first to end the game.

Espenson had two of the Eagles’ seven hits in the game.

Armstrong worked six strong innings, allowing two runs on six hits. He walked three and struck out five. Drew Rothenberger got the final out of the game to earn a save.

However, the nightcap quickly turned against the Eagles, as Redwood Valley scored five runs in the top of the first inning, using three hits and a pair of errors.

Windom cut the deficit to 5-2 in the second, as a throwing error allowed two runners to score.

But that was as close as the Eagles would get. Redwood added a single run in the third, two in the fifth and one in the sixth to take a 9-2 lead. The Cardinals tacked on three in the seventh.

Windom’s final run scored on an Erickson RBI single in the bottom of the seventh.

Erickson had two hits in the loss.

The sixth-seeded Falcons defeated third-seeded Adrian-Ellsworth 6-2, knocking the defending section champions out of the playoffs in the opening round. RRC/WWG then lost 14-9 to second-seeded Murray County Central, dropping to the elimination bracket of the tourney.

In Saturday’s opener, RRC/WWG struck first in the second inning. Keaton Skarupa was hit by a pitch, raced all the way to third on a wild pitch and scored on a Cole VanDeWiele groundout.

In the third, Ashton Juhnke plated a run with a groundout and Skarupa added an RBI single for a 3-0 Falcon lead.

RRC/WWG stretched the lead to 4-0 on a VanDeWiele RBI single.

The Dragons battled back with a pair of runs in the bottom of the fifth. But with two runners in scoring position with one out, Juhnke coaxed a pop-up and a strikeout to end the threat.

Juhnke then gave the Falcons insurance with a two-run triple in the top of the sixth, sealing the win.

VanDeWiele had two hits for the Falcons.

Juhnke worked the first five innings for the win, allowing two runs on one hit. He walked four and struck out six. Isaac Simonson and Hudsen Jenniges each worked a shutout inning of relief, with Jenniges earning a save.

In the nightcap, a wild, back-and-forth start turned into a steady offensive eruption from Murray County Central in a 14-9 win.

The Falcons scored early on a Simonson RBI double and an error, but MCC answered in the bottom of the first on a two-run home run and a run-scoring double.

The Falcons regrouped, scoring five runs in the top of the second to take a 7-3 lead. Quintyn Vold hit an RBI single and Juhnke added an RBI double, with an error allowing Vold and Juhnke to race all the way around the bases. A wild pitch plated a fifth Falcon run in the inning.

RRC/WWG pushed its lead to 8-5 in the third when an errant pickoff attempt allowed Orion Knakmuhs to score.

A groundout from Jenniges in the fourth gave the Falcons a 9-7 lead.

But MCC battled back, tying the game in the bottom of the fourth, then scoring five unanswered runs over the final two at-bats to seal the win.

Juhnke, Simonson and VanDeWiele each had two hits in the loss.