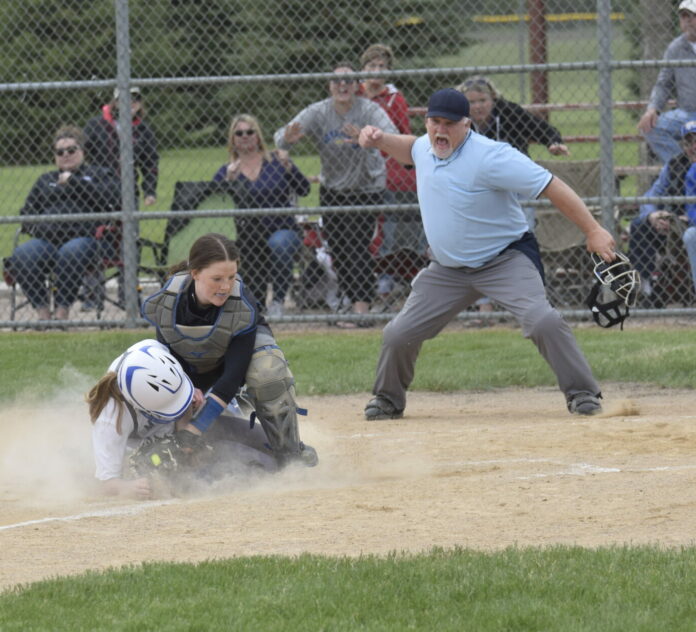 The Windom Eagle softball team kept its season alive in dramatic fashion in the opening game of the Section 3AA Tournament Tuesday in Luverne, but the Eagles will have to battle out of the elimination bracket the rest of the way.

Windom opened the tourney with a thrilling 2-1 victory over Minneota-Canby in the single-elimination opening round. Windom then took an 11-6 loss to top-seeded Luverne to drop into Saturday’s elimination round.

In the opener, the Eagles fell behind 1-0 as the Vikings scored on an error in the second inning.

The Eagles battled back, tying the game in the fourth. Jenna Veenker led off the inning with a double and pinch runner Aubri Spielman scored on a K.J. Huska single.

Then, in the fifth, the Eagles took the lead. Kadyn Paulson reached on a fielder’s choice, stole second and scored on a single from Leah Hauge.

Eagle pitcher Anja Nielsen cruised through the first six innings but ran into a jam in the top of the seventh with two outs. An error and a single put two runners on base when the Vikings hit a single to center field and tried to score from second. But a perfect relay from Spielman in center to Huska to Hauge at the plate threw out the potential tying run at home, ending the game.

Hauge and Huska each had two hits in the win.

Nielsen scattered three hits without a walk and struck out a career-high 13 in the win.

In the nightcap, Luverne scored on a solo home run to lead off the bottom of the first, but the Eagles answered, scoring four runs in the next two innings to take the lead.

Windom scored in the second on a double steal and an error. Then, in the third, Huska had an RBI single and a run scored on an error.

But Luverne answered with four runs in the bottom of the fourth. The Cardinals added three runs in the fifth inning, taking an 8-4 lead.

The Eagles trimmed the deficit to 8-6 in the top of the sixth on an error and a Veenker RBI single, but the Cardinals added three more runs in the bottom of the sixth, sealing the win.

Jenna Veenker, Hailey Veenker and Huska each had two hits in the loss.

Nielsen pitched the first four innings in the loss, allowing seven runs on four hits. She walked four and struck out three.

The loss knocked the Eagles into the elimination bracket. Windom will face Litchfield Saturday, beginning at 1 p.m., at the Marshall Softball Complex.

Next games: Check for updates after each meet.
Windom: vs. Litchfield (at Marshall), May 28