Wolverines, Falcons bow out in Section 2A 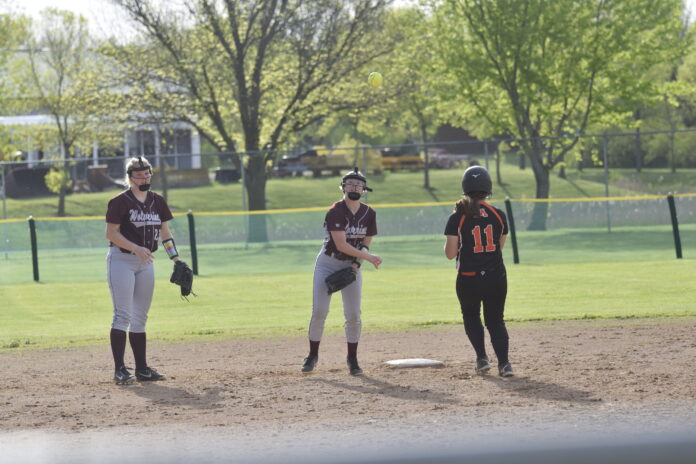 Buffalo Lake-Hector-Stewart made the most of its scoring chances Monday afternoon, claiming a 9-4 victory over Mt. Lake Area-Comfrey in the Section 2A playoffs at Stewart.

MLAC outhit the Mustangs 12-10 in the game, but BLHS was able to come up with timely hits in the late innings, scoring five unanswered runs in its final two at-bats to claim the win.

The Wolverines got on the board in the top of the first when Kennedie Simon scored on an error.

BLHS answered with a run in the first and three in the second before the Wolverines battled back. Presley Dockter hit an RBI double and Alexis Romsdahl hit an RBI single in the fourth, pulling the Wolverines to within 4-3.

Then, MLAC tied the game in the top of the fifth on an Annika Brinkman RBI single.

But the Wolverines stranded nine runners on base in the game, lined into an inning-ending double play and had a runner thrown out at the plate.

Jaci Tollefson, Simon, Brooke Naas and Dockter each had two hits in the loss.

The loss ends the Wolverines’ season with an 8-12 overall record.

Martin County West plated 10 runs in its final three trips to the plate Monday, topping Red Rock Central/Westbrook-Walnut Grove 12-2 in the Section 2A playoffs at Welcome.

RRC/WWG got on the scoreboard first, plating a pair of runs in the top of the first inning on a two-run Mercedes Myers single.

But MCW settled in after that, as the Falcons were held to three hits for the game.

The Mavericks tied the game in the bottom of the first, then took the lead with a two-run third. MCW plated five in the fourth and ended the game with three runs in the fifth.

The loss ends the Falcons’ season with a 6-12 overall record.

Next games: Check for updates after each meet.
Windom: vs. Minneota-Canby (at Luverne), May 24