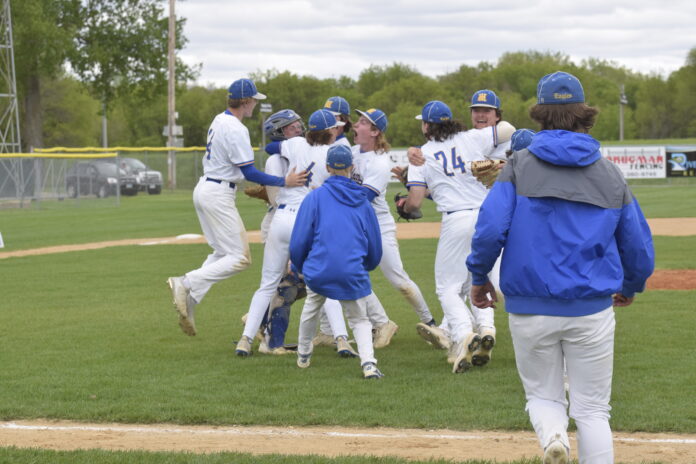 Small ball lifted the Windom Eagle baseball team to its first-ever outright Big South Conference championship Saturday, as the Eagles defeated the top-ranked team in the state in Class AA, Fairmont, by a 2-1 score at Island Park.

Facing Fairmont ace Jacob Crissinger, who threw a no-hitter against the Eagles two weeks earlier, Windom wasted little time ending both the no-hitter and the shutout. In the bottom of the second, Henry Erickson led off with a sharp single off the tip of the Cardinal second-baseman’s glove. Erickson stole second, moved to third on a groundout and scored on a safety squeeze bunt from Wyatt Haugen.

In the fourth, Josh Garrison was hit by a pitch to lead off the inning. He stole second, moved to third on a single by Erickson and scored when Brady Espenson beat out a sacrifice bunt attempt, giving Windom a 2-0 lead.

Fairmont mounted a raly in the top of the fifth, scoring on a sacrifice fly and putting the tying run in scoring position. But a fly ball to left field ended the threat.

The Cardinals then threatened again in the sixth with two runners on base, but a fly out to left and a foul pop-out to catcher ended the threat.

Erickson finished with two of the Eagles’ four hits in the game.

Eagle starter Braydon Kreofsky was sharp throughout the game, allowing one unearned run on five hits in six innings. He struck out five without a walk. Noah Armstrong pitched a scoreless seventh inning to earn a save.

The Mt. Lake Area-Comfrey baseball team ended the regular season with a bang Friday afternoon, rolling to a 9-4 victory over Cleveland at Comfrey.

The Wolverines belted three home runs in the game, including hitting back-to-back blasts for the second time this season.

The Wolverines took a 4-1 lead in the bottom of the first inning. Landon Boldt hit an RBI single and Ian Penner smashed a three-run home run over the right field fence.

In the second, the Wolverines stretched the lead. Tanner Koetzle hit an RBI single, Kolby Kremmin added a run-scoring sacrifice fly and a run scored on a passed bal.

Koetzle, Boldt and Jake Evers each had two hits in the win.

The Falcons committed six errors in the game, which led to eight unearned runs for the Panthers.

The Panthers scored a run in the third, then took the lead with three runs in the fourth. After a run in the sixth, TMB put the game away with a four-run seventh inning.

RRC/WWG scored its final runs in the seventh on a Cole VanDeWiele fielder’s choice grounder and two wild pitches.