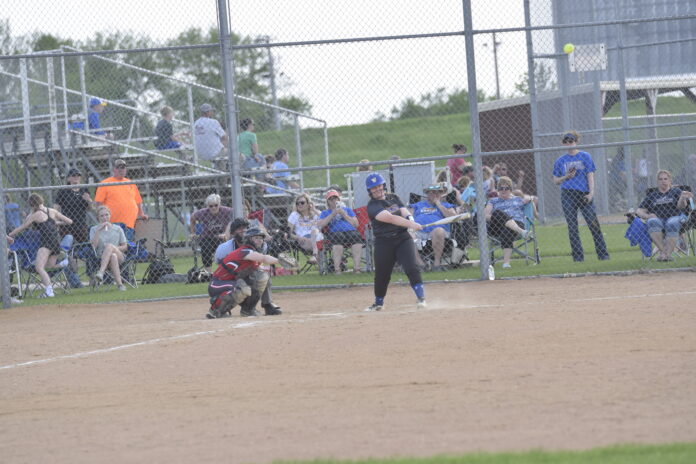 The Windom Eagle softball team came out firing in Thursday’s regular-season finale, scoring in each inning of a 16-1 victory over Red Rock Central/Westbrook-Walnut Grove at the Windom Recreation Area.

The Eagles jumped to a 2-0 lead in the first inning, scoring on a wild pitch and a K.J. Huska groundout. Then, in the second, Ada Smith ripped a two-run single and scored on an error. Leah Hauge added an RBI single for a 6-0 lead.

RRC/WWG cut the deficit to 6-1 in the third on a Sondra Rindfleisch RBI single.

Windom ended the game in the fourth, scoring a run on an error and on a two-run Jenna Veenker single.

Hauge had three hits in the win for the Eagles.

Mercedes Myers and Rindfleisch had two hits each for the Falcons.

Jenna Veenker earned the pitching win for the Eagles, working the first three innings. She allowed six hits and struck out three.

Mt. Lake Area-Comfrey controlled the opening game of a doubleheader Thursday but couldn’t overcome an early deficit in game two, taking a split against Madelia at Comfrey.

The Wolverines won the opener 6-0, then fell 2-1 in the nightcap.

In the opener, Wolverine pitcher Kennedie Simon was sharp, holding the Blackhawks to one hit in the win. Madelia did not have a baserunner until a leadoff walk in the fourth inning.

MLAC got on the board in the bottom of the first on an RBI single from Simon and an RBI double from Alana Morey. Jaci Tollefson added an RBI triple and scored on a Simon single in the second. Brooke Naas added a two-run double in the fourth.

Tollefson had three hits in the win. Simon and Naas added two hits each.

Simon earned the win, allowing one hit and one walk while fanning four.

In the nightcap, Madelia loaded the bases quickly in the bottom of the first inning, scoring on a single and a bases-loaded walk.

It stayed that way until the fourth inning, when Thaila Sengchan hit an RBI single, cutting the deficit to 2-1. But MLAC stranded three runners in scoring position in the game, including one in the top of the fifth.

Annika Brinkman had two hits in the nightcap.

Next games: Check for updates after each meet.
Windom: vs. Minneota-Canby (at Luverne), May 24
MLAC: at Sleepy Eye St. Mary’s, May 20
RRC/WWG: at Section 2A Tourney, May 23