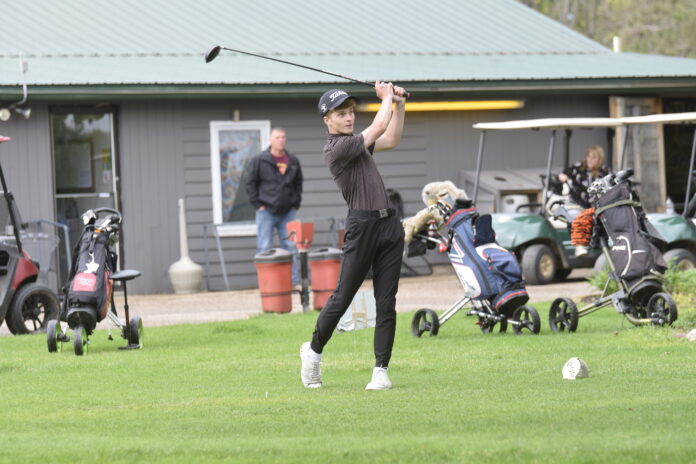 The Eagle boys squeezed out a 164-165 victory over the Bucs, while the BEA girls shot a 180 against an incomplete Eagle team.

Individually for the boys, Carter Rossow led the Eagles, firing a 39. Landon Pillatzki added a 40, followed by Eli Lund with a 41 and Greyson Elder with a 44. Elder had the highlight of the day, holing out a chip for eagle on Hole 3.

The Mt. Lake Area-Comfrey boys golf team turned in the surprise of the season to date Tuesday as the Wolverines won the Red Rock Conference Tournament, played at GreatLife Golf Course in Worthington.

MLAC shot a 374 Tuesday, winning the tournament by seven strokes over Adrian-Ellsworth. Heron Lake-Okabena-Fulda/Westbrook-Walnut Grove had a 397 and Red Rock Central shot a 448.

Adrian-Ellsworth won the outright conference title, which took the low scores from two of the three team events plus the conference tournament. The Dragon boys scored 1455 total. HLOF/WWG was second with 1475. MLAC finished fourth with 1565 and RRC was seventh with 1693.

Individually Tuesday, AE’s Brock Henning was the day’s lowest scorer with an 84.

Grant Oakland and Joey Faber each shot a 92 to lead MLAC. Landen Rempel added a 94 and Aiden Rehnelt shot a 96.

The All-Conference team was based on a player’s lowest two scores from the three regular-season events, plus the conference tournament. HLOF/WWG’s Sawyer Drent was the overall conference champion with a combined score of 242. Carter Drent placed fifth with a 275. MLAC’s Joey Faber also earned all-conference, tying for ninth place with a 288.

The Dragons shot a 419 at the conference tourney, played at GreatLife Golf Course in Worthington. Heron Lake-Okabena-Fulda/Westbrook-Walnut Grove had a 443, followed by RRC with a 474.

The outright conference title was based on the team’s lowest two scores from the three regular-season conference events, plus the conference tournament. AE won the outright title with a score of 1644. HLOF/WWG was second with 1727. RRC was fourth with 1878.

The All-Conference team was based on a player’s lowest two scores from the three regular-season events, plus the conference tournament. Van Maanen was the overall conference champion with a 268. HLOF/WWG’s Elly Bang was second with a 282. Madelyn Koep was eighth with a 305. MLAC’s Olivia Christians was ninth with a 306.