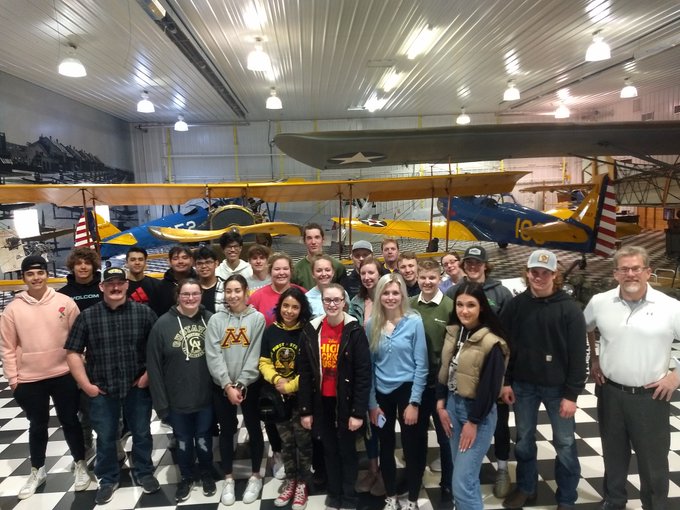 Textbooks often tell only part of the story of history. And while a well-written non-fiction book or historical novel can make a story come alive in the mind of the reader, or a movie visually tell the story, it’s not the same as seeing or touching the actual article that’s the focus of the story.

Lee Carlson’s college literature class got the chance to see history with their own eyes.

After reading “All the Light We Cannot See” by Anthony Doerr, a historical novel about World War II, the class of 28, along with Carlson and chaperones Dustin Stevens and Holly Ford, made the book come alive with a trip to Fagen Fighters World War II Museum at the airport in Granite Falls. The museum is four hangars of fighter planes, vehicles and exhibits that tell the story of the Second World War.

“They’ve got restored planes from World War II, all the military vehicles and inside is a wrap-around mural of all these different scenes — and it’s all just spotless,” said Carlson, who had been to the museum before, but was the first year he was able to take students. “It’s amazing.”

Students were able to roam freely through the hangars and view the planes and displays. They also viewed scrapbooks of local information connected to WWII in the library and watched a short movie about WWII in the museum’s theater.

For much more on students’ experiences, see the story on the Education page in the May 18 issue of the Cottonwood County Citizen.