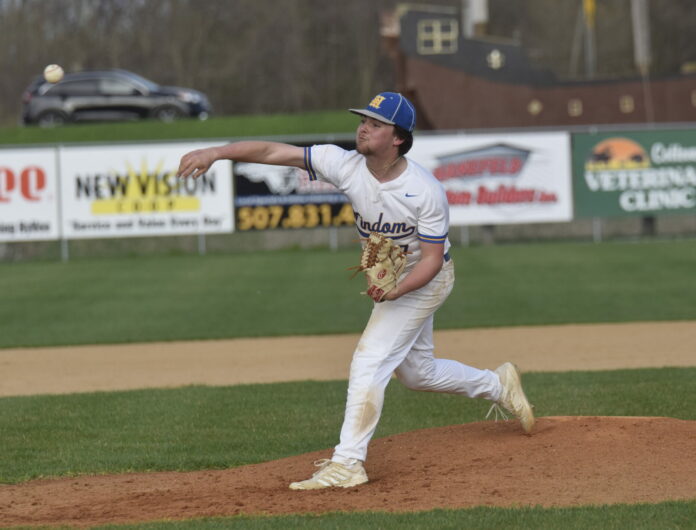 The Windom Eagle baseball team improved to 9-3 on the season Tuesday, rallying for a 6-2 victory over Jackson County Central at Island Park.

The Eagles took a 2-1 lead in the third inning on a wild pitch and a Braydon Kreofsky RBI single.

After JCC tied the game at 2-2 in the top of the fourth, the Eagles put the game away in the bottom of the inning. Noah Armstrong scored on an error to put the Eagles ahead. Drew Rothenberger then blasted an RBI double to the left field fence. Kreofsky followed with an RBI single and the Eagles scored their final run on a double steal attempt.

Rothenberger had three hits in the win. Kreofsky had two hits and two RBI.

Mt. Lake Area-Comfrey pulled away in the late innings Tuesday afternoon, claiming a 9-3 victory over Heron Lake-Okabena-Fulda in Mt. Lake.

The Wolverines got on the board in the first inning on a Kolby Kremmin RBI double. Then, in the third, two runs scored on an error.

HLOF pulled to within 3-2 in the top of the fourth, but the Wolverines regained control in the bottom of the inning. Landon Boldt had an RBI single, Caleb Simon hit an RBI double and Ian Penner plated a run with a sacrifice fly.

In the sixth, Kremmin and Simon each hit their second RBI doubles of the game and Jake Evers hit an RBI single, capping the scoring.

Simon led the Wolverines with three hits. Kremmin and Evers had two hits each.

Alex Blom earned the complete-game pitching victory, holding the Coyotes to five hits. He walked one and struck out eight.

MCC struck first in the top of the fourth, but the Falcons immediately answered, as Hudsen Jenniges ripped a two-run double for the Falcons’ only runs of the game.

Jenniges had two of the Falcons’ three hits in the victory. He also pitched a scoreless seventh inning to earn a save.

In the nightcap, YME used back-to-back big innings to take command of the game early, scoring seven runs in the second and five more in the third.

The lone Falcon run scored in the bottom of the second inning on a Jackson Shannon sacrifice fly.