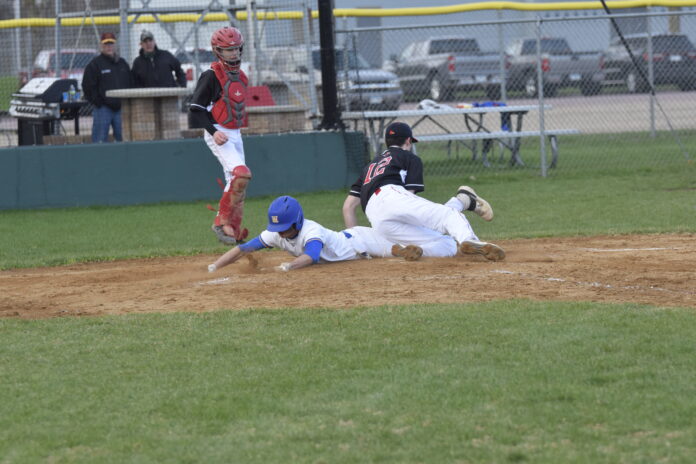 The Windom Eagle baseball team didn’t have many chances to score, but took advantage of the ones they had Thursday, eking out a 2-1 victory over Redwood Valley at Island Park.

The Eagles were held to just one hit in the game and had only four runners reach base.

Trailing 1-0 in the bottom of the fifth, Brady Espenson drew a leadoff walk, stole second and third and scored on a safety squeeze bunt from Wyatt Haugen.

Then, in the bottom of the sixth, Tucker Renquist beat out a perfect bunt, giving the Eagles their only hit of the game. Renquist then stole second, advanced to third on a Drew Rothenberger sacrifice bunt and scored on a wild pitch.

Noah Armstrong worked 6-2/3 strong innings to earn the pitching win. He scattered five hits, walked one and struck out two. Braydon Kreofsky got the final out of the game on a lineout to shortstop to earn the save.

Red Rock Central/Westbrook-Walnut Grove got off to a good start on offense and made leads stand in both games of a doubleheader Thursday, sweeping Edgerton-Southwest Christian in Lamberton by scores of 8-3 and 9-5.

In the opener, the Falcons took a 2-1 lead in the bottom of the first on a two-run Keaton Skarupa single. Quintyn Vold added an RBI double in the second.

The Falcons scored twice on an error in the fourth, then got a Jayden Lang RBI groundout in the fifth. In the sixth, Gavin Hesse plated a run with a sacrifice fly and Dan Kleven hit an RBI single.

Vold, Jake Jackson and Skarupa each had two hits.

In the nightcap, the Falcons took a 2-0 lead in the top of the second on a wild pitch and an error.

RRC/WWG added runs in the third on an error, a balk and a double steal.

In the sixth, Hudsen Jenniges scored on a double steal.

The Falcons sealed the win in the seventh as Jackson scored on a double steal, Juhnke scored on a wild pitch and Jenniges hit an RBI single.

Jenniges had three hits in the win for the Falcons.

Three disastrous innings doomed the Mt. Lake Area-Comfrey baseball team Thursday, as the Wolverines were swept in a doubleheader by Adrian-Ellsworth at Adrian by scores of 11-4 and 25-1.

In the opener, the Wolverines briefly held a lead, but the Dragons used a seven-run fifth inning to take the lead for good.

MLAC scored on an error in the first inning. In the second, Caleb Simon led off with a solo home run and Landon Boldt and Jake Evers hit back-to-back RBI doubles for a 4-2 Wolverine lead.

AE scored single runs in the third and fourth innings, then plated seven in the fifth to seal the win. The Dragons scored three runs on wild pitches and had a two-run single in the inning.

Kolby Kremmin and Boldt had two hits each in the loss.

Simon took the pitching loss, allowing 10 unearned runs in five innings on the mound. He walked two and struck out three.

In the nightcap, the Dragons scored seven runs in the second inning, then plated 14 runs in the top of the third, on their way to a 25-1 victory.

The lone Wolverine run scored on an error in the fourth inning.

Sam Stade had two of the Wolverines’ four hits.

Tyler Dick took the pitching loss, allowing eight runs on five hits in two innings. He walked one and struck out one.

Next games: Check for updates after each game.
Windom: vs. Fairmont, Blue Earth, May 7
MLAC: vs. Mankato Loyola (at Mt. Lake), May 9
RRC/WWG: at Minneota, May 6