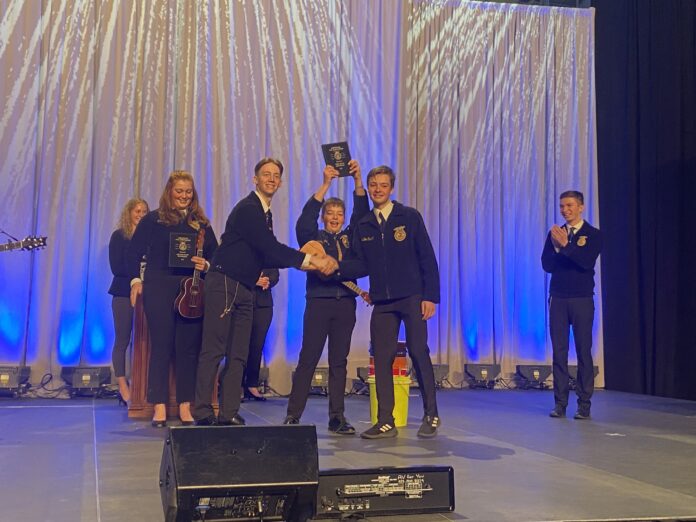 For the first time in a number of years, Cottonwood County FFA programs won’t be sending one of its Career Development Event teams to the National FFA Convention in October.

That doesn’t mean that county FFA programs were completely shut out.

While there won’t be any teams competing at the national convention later this year, two brothers will be exhibiting their talents on the national stage.

Mt. Lake FFA’s Oakland brothers, Grant and Brayden, won the talent competition at the Minnesota FFA Convention held last week on the campus of the University of Minnesota-Twin Cities.

Brayden sang and played the ukulele and Grant bucket drummed to the 21 Pilots song “House of Gold.”

They now have the opportunity to compete in the talent competition at the National FFA Convention in Indianapolis, Ind.

“I believe they have auditions for that but they’ll have that chance to at least audition,” said Mt. Lake FFA adviser Katie Christopher.

While no teams from Cottonwood County will be competing at the national convention, a couple came very close.

For much more on the 2022 Minnesota FFA Convention, including full results involving county school FFA teams, see the story on the Education page in the May 4 edition of the Cottonwood County Citizen on newsstands Wednesday.