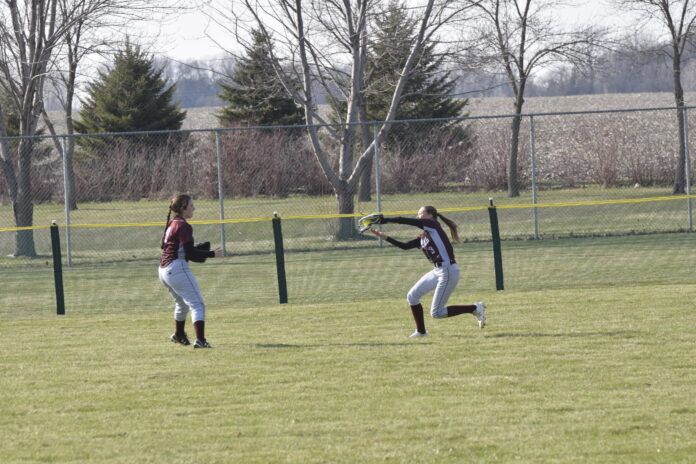 The Windom Eagle softball team couldn’t get going on offense and struggled on defense Tuesday, falling 14-1 at St. James.

The Saints scored 11 unearned runs courtesy of seven Eagle errors in the game. Several of those errors came in the bottom of the third, when the Saints plated 10 runs.

The lone Eagle run scored in the second inning. Rylie Raverty was hit by a pitch and later scored when Alexa O’Donnell reached on an error.

Jenna Veenker took the pitching loss, allowing 10 runs on five hits in 2-1/3 innings. She walked four and struck out two.

MLAC built and early lead, scoring in the first inning when Jaci Tollefson walked, stole second, advanced on a fielder’s choice and scored on an error.

In the second, Tollefson slapped an RBI single up the middle for a 2-0 Wolverine lead.

Sleepy Eye tied the game in the top of the fourth, but the Wolverines answered with a two-out rally in the bottom of the inning. Brooke Naas hit an RBI single to right, with Kennadie Simon and Naas circling the bases when the ball rolled all the way to the right field fence. Annika Brinkman then added an RBI single for a 6-2 lead.

Sleepy Eye got a run back in the top of the fifth, but Simon shut the door the rest of the way to preserve the win.

Eight Falcon errors led to 11 unearned runs in the game.

RRC/WWG held a 2-0 lead in the top of the first when Sondra Rindfleisch hit a two-run single.

RRC/WWG then went up 5-1 in the third. Mercedes Myers ripped an RBI double and scored when Izzy Rentschler reached on a fielder’s choice. Nora Hemmingsen added an RBI single.

But TMB used an eight-run bottom of the third to take the lead for good, capitalizing on four errors.

Addeson Jenniges hit an RBI single for the Falcons’ final run in the top of the fifth.

Amelia Sikel, Myers, Rindfleisch, Jada Radmaker and Hemmingsen each had two hits in the loss.