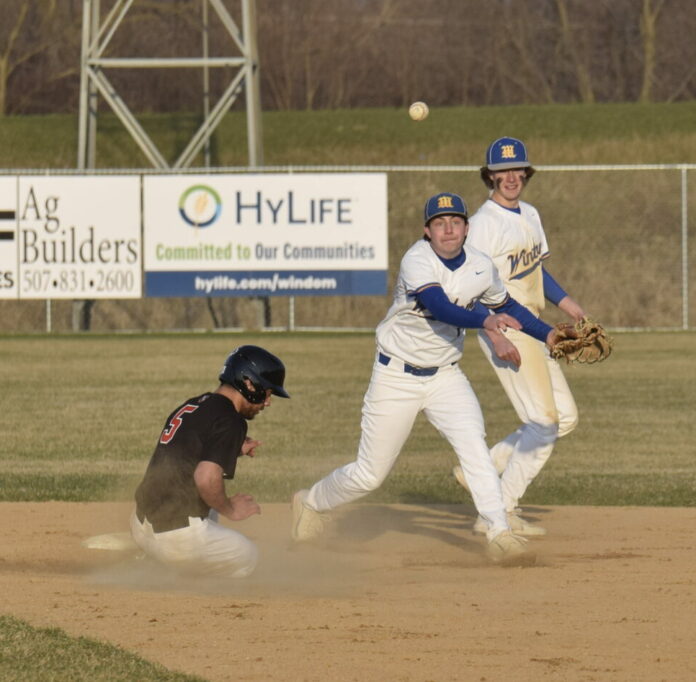 The Windom Eagle baseball team ran into one rough inning Tuesday afternoon, dropping the first game of a split doubleheader 11-1 to Luverne. The Eagles bounced back in the nightcap, defeating St. James Area 7-0 at Island Park.

In the opener, the Eagles got on the board first. Drew Rothenberger walked, stole second and scored when Brayden Kreofsky reached on an error.

But Luverne battered the Eagles in the top of the seventh, scoring seven runs, including five unearned runs. The Cardinals added three runs in the fourth and one in the fifth.

In the nightcap, Eagle pitchers Josh Garrison and Henry Erickson combined for a four-hit shutout. Garrison worked six efficient innings, scattering three hits without a walk and striking out seven.

The Eagle offense picked up the slack from game one, scoring twice in the bottom of the first. Garrison had an RBI single and scored on an error.

In the second, Rothenberger plated a run with a sacrifice and Kreofsky smashed a two-run triple.

Espenson drove in the final Eagle runs in the fourth with a two-run single.

Red Rock Central/Westbrook-Walnut Grove’s offense came to life in the top of the fourth inning Tuesday as the Falcons rallied for a 12-3 victory at Wabasso.

The Falcons sent 13 hitters to the plate and scored nine runs in the fourth inning. Cole VanDeWiele, Isaac Simonson, Keaton Skarupa and Gavin Hesse each had RBI singles in the inning.

VanDeWiele and Skarupa added RBI singles and Simonson had an RBI double in the fifth.

Skarupa led the Falcons with three hits. VanDeWiele, Ashton Juhnke and Simonson had two hits each.

Simonson picked up the pitching win, working two innings in relief. He allowed two runs on five hits, walked one and struck out three.