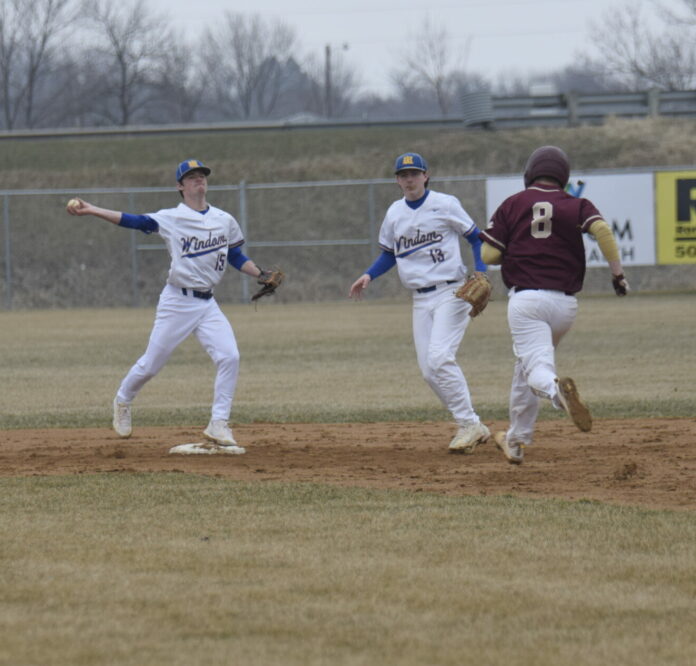 The Windom Eagle baseball team improved to 3-0 on the season Friday, capitalizing on miscues to claim a 7-4 victory over Springfield at Island Park.

The Tigers committed eight errors, which led to six unearned runs for the Eagles.

Trailing 1-0 in the bottom of the first, the Eagles tied the game when Braydon Kreofsky scored on an error.

Springfield led 2-1 in the bottom of the third before the Eagles took the lead for good. Kreofsky hit an RBI single, Brady Espenson drew a bases-loaded walk, Noah Armstrong plated a run with a groundout and two runs scored on errors.

Windom scored its final run in the sixth when Armstrong reached on an error, driving in Garrison.

Chayton Struck worked the first four innings to pick up the pitching win, allowing two runs on two hits. He walked four and struck out one. Cody Hockel worked a scoreless seventh for a save, striking out one.

Mt. Lake Area-Comfrey saw a lead slip away in the top of the seventh inning, but worked out of a jam to force extra-innings before claiming a walk-off, nine-inning 5-4 victory over Truman/Martin Luther/Granada-Huntley-East Chain Friday in Mt. Lake.

The Wolverines jumped to 3-0 lead in the bottom of the second, scoring on a wild pitch, a Tanner Koetzle RBI single and a Sam Pidde fielder’s choice.

The Wolverines stretched the lead to 4-0 in the fourth on a Pidde RBI single.

T/ML/GHEC got a run back in the top of the fifth, then rallied for three runs in the top of the seventh, tying the game at 4-4. The Jaguars had the bases loaded with two outs, but a flyout to left field ended the threat.

The Wolverines put two runners on base with no outs in the bottom of the eighth but could not score.

Then, in the ninth, Kolby Kremmin and Ian Penner drew back-to-back walks to lead off the inning. After a double steal put two runners in scoring position, Caleb Simon was intentionally walked, loading the bases. Pinch hitter Cayden Moody then hit a drive to deep right field, ending the game with a run-scoring sacrifice fly.

Koetzle had two hits to lead the Wolverine offense.

Khalid Fentanez picked up the pitching victory, working one inning of shutout relief. He allowed three hits and struck out two.