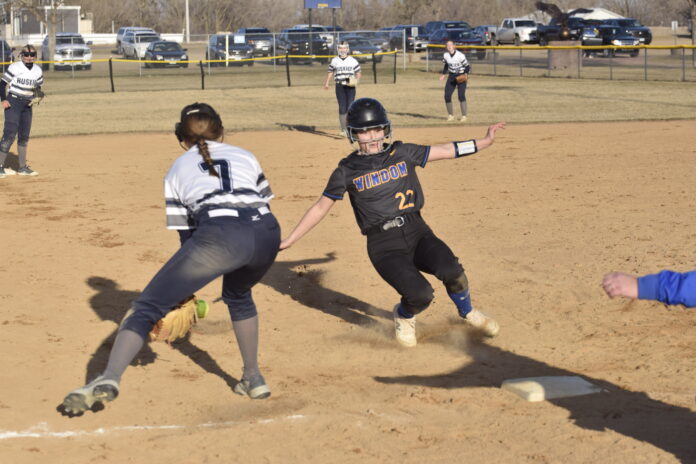 The Windom Eagle fastpitch softball team picked up its first win of the season Thursday, splitting a doubleheader with Jackson County Central at the Windom Recreation Area.

The Eagles won the opener 7-2, then dropped the nightcap 9-4.

In the opener, the Eagles took a 2-0 lead in the bottom of the second. Sydney Skarphol hit an RBI single and scored on a Leah Hauge groundout.

JCC rallied, tying the game with single runs in the fourth and fifth innings. But in the bottom of the fifth, the Eagles took the lead for good. Kadyn Paulson plated a run on a fielder’s choice, Ada Smith scored on an error, K.J. Huska slashed a two-run double and Jenna Veenker scored on a passed ball.

In the nightcap, the Eagles started with a 1-0 lead in the top of the first on a Huska RBI single. But JCC answered with five runs in the bottom of the first, capitalizing on four Eagle errors.

Trailing 6-1 in the third, the Eagles got two runs back, as Skarphol hit an RBI groundout and Alexa O’Donnell had an RBI single. But the Huskies plated three runs in the fifth, putting the game away.

Windom’s final run scored on a wild pitch in the seventh inning.

Paulson and Huska had two hits each in the loss.

O’Donnell took the pitching loss, allowing six runs on one hit in two innings of work. She walked two and struck out three.

A pair of RBI singles in the bottom of the seventh gave Murray County Central a walk-off 7-6 victory over Mt. Lake Area-Comfrey Thursday in Slayton.

MLAC jumped to a quick lead with three runs in the top of the first. Brooke Naas hit an RBI single and Annika Brinkman added a two-run single.

MCC answered with four runs in the bottom of the first, but MLAC tied the game with a Kennadie Simon RBI single in the second.

The Wolverines regained the lead in the fifth. Ella Dockter hit an RBI single and Brinkman plated a run with a sacrifice fly, giving the Wolverines a 6-5 lead.

But a pair of RBI singles in the bottom of the seventh gave the Rebels the victory.

Jaci Tollefson, Simon and Dockter each had two hits in the loss for the Wolverines.

Red Rock Central/Westbrook-Walnut Grove mounted a furious rally in the final inning to take the lead, but defensive woes doomed the Falcons as Adrian-Ellsworth claimed a walk-off 17-16 victory Thursday in Ellsworth.

The Falcons committed 11 errors in the game, with two in the bottom of the seventh inning allowing the tying and winning runs to score for the Dragons.

RRC/WWG tied the game at 3-3 in the top of the third on an RBI single from Sondra Rindfleisch and a two-run single from Izzy Rentschler. The Falcons added three runs in the fourth on RBI singles from Amelia Sikel and Hailey Amsden and an Addeson Jenniges groundout.

The Falcons added a run in the sixth when Ella Erickson scored on an error.

The Dragons used a seven-run sixth inning to take a 15-7 lead, but the Falcons plated nine runs in the top of the seventh, taking a 16-15 lead. Erickson had a bases-loaded walk, Sikel hit an RBI single and Mercedes Myers unloaded a three-run double. Rindfleisch followed with an RBI double and Nora Hemmingsen hit a three-run double, giving the Falcons the lead. RRC/WWG had a runner in scoring position before a flyout to deep center ended the threat.

In the bottom of the seventh, the Dragons got a one-out single. An error tied the game and another error eventually gave the Dragons the win.

Rentschler and Amsden each had three hits in the loss for the Falcons. Jenniges, Rindfleisch, Hemmingsen and Sikel had two hits each.