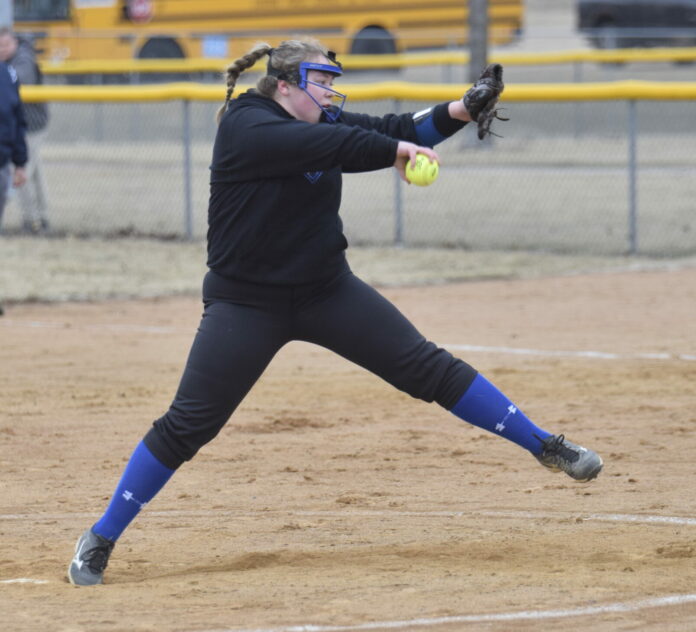 The Windom Eagle fastpitch softball team opened its season in rough fashion Tuesday, dropping both ends of a doubleheader against Luverne at the Windom Recreation Area.

The Cardinals erupted late in the first game, scoring 12 runs in its final two at-bats to claim a 14-4 victory. Then, in the nightcap, Luverne rallied to force extra innings and scored in the bottom of the ninth to claim a 6-5 victory.

In the opener, the Eagles got on the board first, as K.J. Huska scored on a wild pitch in the second inning for a 1-0 lead.

Luverne took the lead in the third on a two-run home run, then tacked on five runs in the fifth and seven in the sixth.

The Eagles scored their final runs in the bottom of the sixth on an error and a two-run Paikea Ngiraked single.

Aubri Spielman and Huska had two hits each in the loss.

Jenna Veenker took the pitching loss, allowing 13 runs on eight hits in five innings. She walked three and struck out 10.

In the nightcap, the Eagles jumped to an early lead as Huska blasted a two-run home run in the top of the first.

In the second, Hailey Veenker walked, moved to third on an error and scored on the back end of a double steal, giving the Eagles a 3-0 lead.

Luverne battled back before the Eagles pushed their lead to 5-2 in the sixth. Huska scored on a double steal and Leah Hauge ripped an RBI single.

But Luverne scored once in the sixth and twice in the seventh, tying the game at 5-5. The Cardinals then ended the game in the ninth inning with an RBI single.

Camryn Elness had two hits in the loss.

Alexa O’Donnell took the pitching loss, working a total of 6-1/3 innings. She allowed four runs on eight hits, walked three and struck out one.

The Wolverines hammered out a season-high 13 hits.

In the bottom of the first, MLAC got an RBI double from Brooke Naas and two runs scored on an error. Naas added a two-run double in the second, giving the Wolverines a 5-0 lead.

RRC/WWG answered in the third, as Amelia Sickel drew a bases-loaded walk and Izzy Rentschler had a run-scoring sacrifice fly, making the score 5-2.

Rentschler added an RBI single in the fifth, cutting the deficit to 5-3 before the Wolverines slammed the door.

In the bottom of the fifth, Jaci Tollefson plated a run with a groundout and Kennedie Simon hit a two-run single, stretching the Wolverine lead to 8-3.

Tollefson and Sengchan each had three hits for the Wolverines. Naas added a pair of hits.

Simon earned the complete-game pitching win for the Wolverines, scattering four hits. She walked two and struck out seven.

Natalie Wahl took the loss for the Falcons, allowing five runs on five hits in 3-1/3 innings. She walked three and struck out five.