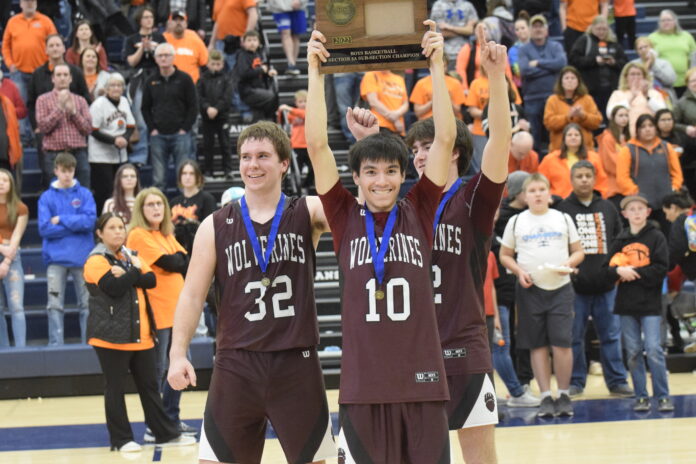 A strong start on both ends of the floor propelled Mt. Lake Area-Comfrey to a commanding lead early Tuesday night, as the Wolverines rolled to an 83-59 win over Madelia in the Section 2A South championship game, played at St. Peter.

The Wolverines were able to turn defense into offense early, converting four early steals into fast-break buckets. An early 11-0 run allowed the Wolverines to take a 15-2 lead and eventually build the early lead to 23-4.

The teams traded bucket most of the rest of the first half, with the Wolverines holding a 37-21 lead at the break.

The Wolverines eventually pushed the lead to over 20 points on a Khamvongsa free throw and an Ashton Toll putback. The Wolverines’ scored the final points of the night when exchange student Iker Lopez banked home a three-pointer at the horn.

MLAC had a balanced scoring night, led by Khamvongsa with 23 points. Kremmin and Olson each scored 16 and Toll finished with 11.

With the win, the Wolverines advance to face Sleepy Eye St. Mary’s in the Section 2A championship game, which will be played Friday at 6 p.m., at Bresnan Arena at Minnesota State University-Mankato.