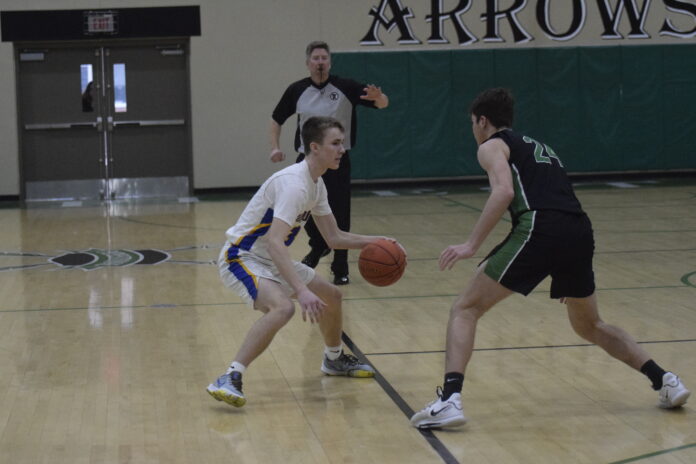 The Windom Eagles were able to make several runs, but an overall poor shooting performance wound up ending the Eagles’ season with a 66-54 loss to Pipestone in the Section 3AA playoffs Saturday at Pipestone.

The Eagles were able to race to an early 11-3 lead, but Pipestone methodically battled into the lead with a strong inside-outside game. The Arrows were able to build the lead to eight by halftime.

In the second half, the Eagles mounted several comeback bids, cutting the deficit as low as four at one point and five on two others. But the Arrows were able to answer every push by the Eagles before eventually pulling away late.

The Arrows held the Eagles to a 34% shooting performance for the game. Windom also struggled from the line, going 4-of-11, compared to 17-of-23 for the Arrows.

Only three players scored in the game for the Eagles. Henry Erickson led the way with 29 points. Abe McKibbin scored 14 and Dylan Serreyn added 11 points.

Westbrook-Walnut Grove’s defensive intensity turned the tables for the Chargers Saturday, as WWG rallied for a 52-47 victory over Murray County Central in the Section 3A playoffs at Worthington.

WWG trailed much of the game and trailed by as many as six points in the second half. But a 9-0 run propelled the Chargers into the lead. Dan Kleven hit a pair of buckets in the stretch, while Austin Parker added a hoop and Cole VanDeWiele hit a three-pointer.

MCC tied the game back up at 39-39, but a VanDeWiele three-pointer gave the Chargers the lead for good. WWG was able to seal the win from the free throw line late.

Top-seeded Southwest Minnesota Christian had its foot on the gas from the start Saturday, running away with a 79-37 victory over Red Rock Central in the Section 3A playoffs at Worthington.

SWC opened the game with a 9-0 burst and quickly stretched the lead to 16-3 before eventually building a 24-point halftime lead at 43-19.

SWC shot a sizzling 52% from the field for the game and forced the Falcons into 26 turnovers.

Joe Strock and Isaac Simonson each scored 12 points to lead the Falcons.