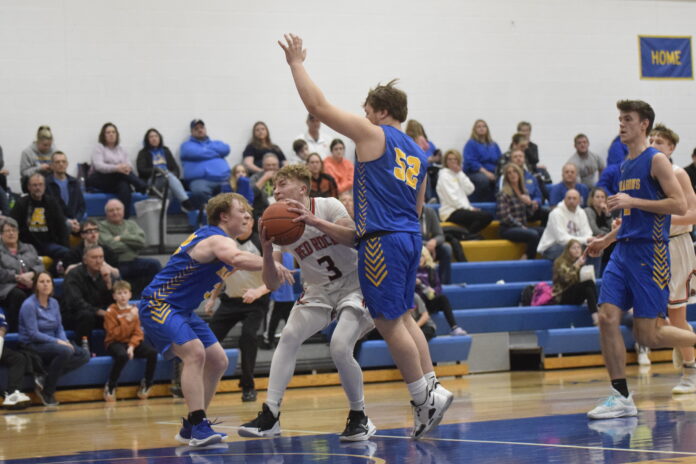 Red Rock Central saw a 12-point second-half lead slip away Thursday night, but a three-pointer from Ashton Juhnke with four seconds left on the clock saved the day, as the Falcons defeated Adrian-Ellsworth 60-58 in the Section 3A pigtail round at Adrian.

RRC started the game with a 7-0 run after AE’s leading scorer, Payton Lewis, picked up two fouls in the first 25 seconds of the game.

RRC was able to build the lead as large as nine, but a three-pointer by Lewis at the halftime buzzer cut RRC’s lead to six.

The Falcons then started the second half strong, stretching the lead to 12. But the Dragons battled back with a trio of key three-pointers to cut into the Falcon deficit.

Meanwhile, the Falcons couldn’t capitalize on chances to put the game away from the free throw line.

With time winding down, the Dragons fed the ball to Lewis, who caught the Falcons off-guard by passing to a cutting teammate for an open lay-up, giving the Dragons a 58-57 lead.

But RRC rushed the ball upcourt and fed to Juhnke in the right corner for a three-pointer, giving RRC a 60-58 lead with four seconds left. A final half-court desperation attempt by Lewis hit off the back iron of the rim, preserving the Falcon victory.

Joe Strock paced the Falcons with 21 points, including 13 in the first half. Juhnke and Jayden Lang each scored 11 and Isaac Simonson added 10 in the victory.