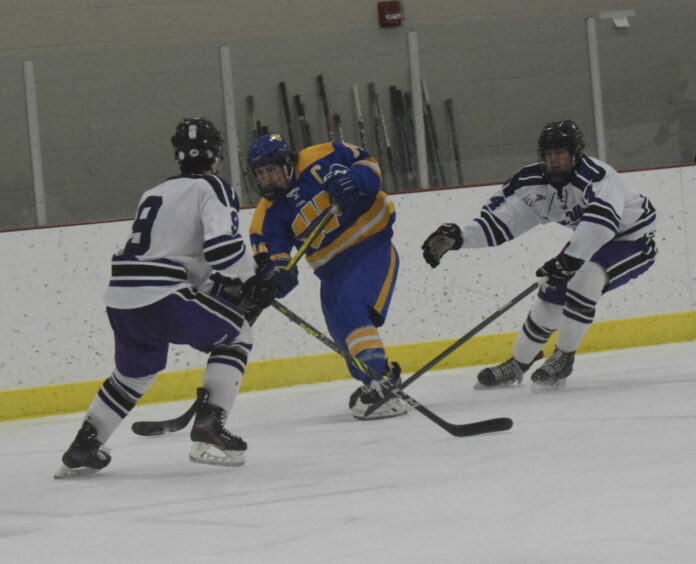 A late rally for the Windom Area boys hockey team came up just short Saturday, as the Eagles fell 4-3 to top-seeded New Ulm in the Section 3A semifinals at New Ulm.

New Ulm’s special teams proved to be the difference, scoring a pair of power play goals and a shorthanded goal in the game.

New Ulm got on the board 4:17 into the game, but the Eagles answered just over a minute later when Wriley Haugen stuffed a rebound into the New Ulm net, tying the game at 1-1.

In the second period, an early Eagle penalty gave New Ulm a power play, with Taylor Hansen scoring 2:14 into the period.

Then, late in the period, disaster struck for the Eagles on the power play, when a cross-ice pass attempt was intercepted by New Ulm’s Austin Uecker, who raced the other direction and scored on a shorthanded breakaway, giving New Ulm a 3-1 lead.

The Eagles were able to cut the deficit to 3-2 early in the third, when a scramble in front of the net was won by Ben Purrington, who poked the loose puck into the net. But moments later, the Eagles were whistled for back-to-back penalties.

The Eagles again mounted a comeback, with Karson LaCanne scoring while camped by the corner of the New Ulm net. That made the score 4-3 with 4:08 left on the clock.

The Eagles tried to pull their goalie for the final 90 seconds, trying desperately to tie the game. But New Ulm was able to clear the zone, then pinned the puck against the board to run out the final 10 seconds of the clock.

New Ulm outshot the Eagles 34-30 for the game. Goalie Dan Stubbe finished with 30 saves in the loss.