Cobras, Falcons each send one to state 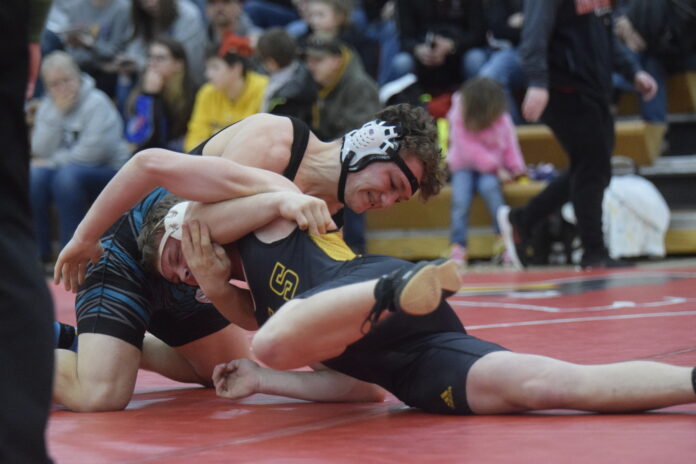 Cobra senior Micah Holmberg advanced to the state tournament as the section runner-up at 182 pounds. Holmberg opened the tournament with a fall, then won a 14-7 decision in the semifinals over Wyatt Williamson of Martin County. In the championship, Holmberg dropped a 3-2 decision to Brady Anderson of Hutchinson/Buffalo Lake-Hector-Stewart. However, since Williamson ended up as the third-place finisher, no true second match was needed, sending Holmberg to the state tournament for the first time.

The Cobras had three other section placewinners. At 106 pounds, Preston Xayachak lost a quarterfinal match but battled his way back through the wrestlebacks. He then lost a 12-1 major decision to Landon Marthaler of Marshall, who handed Xayachak both of his losses in the tournament. Xayachak finished in fourth place.

At 120 pounds, Thavien Xayachak opened with a fall, then lost in the quarterfinals to Ethan Meyer of Worthington. Xayachak then recorded three consecutive falls to advance to the third-place match, where he lost a second time to Meyer, this time by a 4-2 score.

At 138 pounds, Caden Swoboda lost an 8-2 decision in the quarterfinal round, then picked up back-to-back victories before dropping an 8-7 decision to Marqavion Haefner of New Ulm. Swoboda ended his season and career with a 5-0 win over Lincoln Ourada of Redwood Valley to finish third. During the tournament, Swoboda recorded the 100th victory of his varsity career.

Red Rock Central had one wrestler advance to the Class A State Tournament, while two others fell in true second matches at Saturday’s Section 3A Tournament, held in Wabasso.

Junior Vander Mathiowetz advanced to the state tournament as the runner-up at 182 pounds. Mathiowetz won his opening match by fall, then claimed a 6-1 semifinal victory over Quentin Wolf of Adrian-Ellsworth. Mathiowetz then dropped a 3-0 decision to Caleb Vancura of Jackson County Central in the championship. However, since Wolf placed third, no true second match was held, sending Mathiowetz to his first state tournament appearance.

At 126 pounds, eighth-grader Evan Bartholomaus had a bye into the semifinals, where he claimed an 11-6 victory. In the championship, Bartholomaus dropped a 9-0 major decision to Landon Andrews of Jackson County Central. That dropped Bartholomaus into a true second match, which he lost 6-0 to Kollin Anderson of St. James.

At 220 pounds, junior Keaton Skarupa opened the tournament with a fall, but lost his semifinal by fall. Skarupa then won a major decision and a decision, setting up a true second match. But Skarupa dropped a heartbreaking 8-7 decision to Travis Willhite of Tracy-Milroy-Balaton/Westbrook-Walnut Grove to finish third.