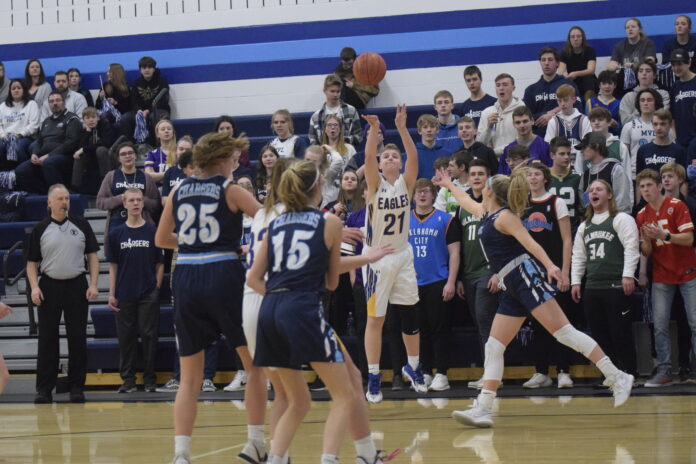 A frigid shooting performance doomed the Windom Eagle girls basketball team Saturday, as the Eagles bowed out of the Section 3AA playoffs with a 64-40 loss to Minnesota Valley Lutheran in New Ulm.

MVL took a page out of the Eagles’ playbook, bombing away from the outside much of the game. The Chargers hit six three-pointers in the first half and had 10 for the game.

Meanwhile, the Eagles struggled from the field, shooting a paltry 22% for the game.

KJ Huska closed her career with 16 points to lead the Eagles in the loss. Hadley Sammons and Hannah Dauer each scored seven points.

Red Rock Central was able to exact a measure of revenge from its regular-season finale loss, knocking out Edgerton 51-35 in the Section 3A South Playoffs Saturday in Worthington.

The Falcons held the Dutchmen to three field goals in the first half, which allowed RRC to build a commanding 32-13 lead.

Edgerton battled back in the second half, but RRC was able to do enough damage from the free throw line late to preserve the victory.

Sondra Rindfleisch led the Falcons with 16 points. Lilly Stavnes and Karli Arkell each scored 13 points in the win.

With the victory, RRC advances to face top-seeded Tracy-Milroy-Balaton Tuesday night in Worthington, beginning at 6 p.m.

Southwest Christian’s relentless defensive pressure turned defense into offense Saturday, as the Eagles cruised to a 67-27 win over Westbrook-Walnut Grove in the first round of the Section 3A playoffs at Worthington.

SWC forced 25 Charger turnovers in the game and held WWG to 24% shooting. The Eagles converted those turnovers into 35 points, including 26 points in transition.

Amelia Sikel led WWG with 10 points in the loss, all in the second half. Isabel Klumper added six points.

Next games: Check for updates after each game.
MLAC: at Sleepy Eye, March 1
RRC: vs. TMB (at Worthington), March 1