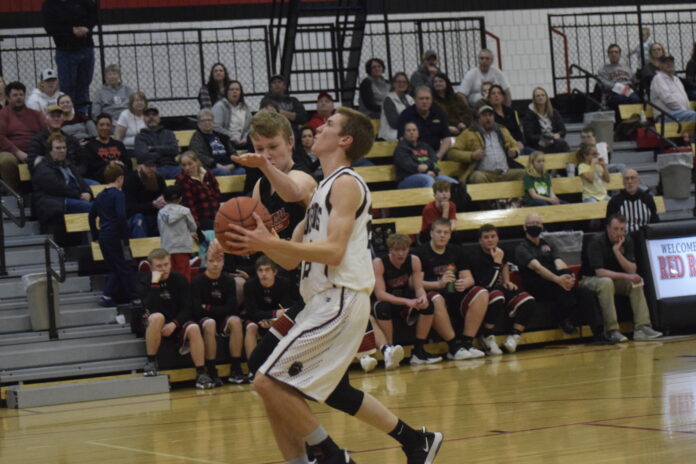 Redwood Valley raced to an early 17-point lead in the first half, but the Eagles were able to trim the deficit to eight points by halftime.

But the Cardinals came out strong in the second half, stretching the lead back to nearly 20 points and answering any potential Eagle rally.

Henry Erickson led the Eagles with 22 points in the loss. Abe McKibbin scored 18, Drew Rothenberger added 14 and Dylan Serreyn scored 12 in the loss.

Mt. Lake Area-Comfrey surged in the first half Tuesday night, building a commanding lead and cruising to a 73-29 victory over Red Rock Central at Lamberton.

The Wolverines blew the game open by holding the Falcons without a point for nearly an eight-minute stretch in the first half. That allowed MLAC to take a 30-point halftime lead.

The Wolverines also forced 26 Falcon turnovers in the game.

Kolby Kremmin, Carter Olson and Ashton Toll each scored 15 points in the win for the Wolverines.

Southwest Minnesota Christian held Westbrook-Walnut Grove’s offense in check all night Tuesday, allowing the Eagles to pull away for an 83-43 victory at Westbrook.

SWC shot nearly 59% from the field for the game while holding WWG to a paltry 33% on its home floor. That allowed the Eagles to race to a 17-point lead.

SWC then outscored the Chargers 37-14 in the second half.