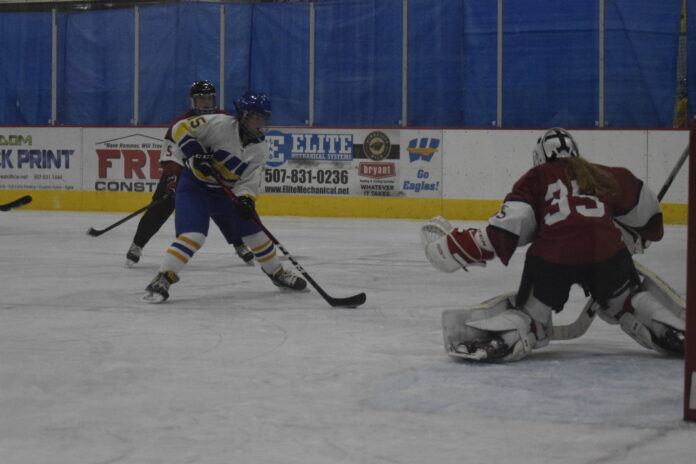 The Windom Area girls hockey team saw its season come to an abrupt end Thursday night, as Fairmont claimed a 2-1 victory in the Section 3A playoffs at the Windom Arena.

The Cardinals scored 3:14 into the game, when Mackenzie Householder intercepted a clearing pass attempt and scored an unassisted goal.

The Eagles were able to tie the game at 1-1 with one minute to play in the first period on a five-on-three power play. Presley Dockter knocked down a clearing attempt by the Cardinals, weaved through the defense and slid a shot past the Cardinal goalie, tying the game at 1-1.

But in the second period, Fairmont went on the attack, peppering the Eagle net with shots on goal. With 5:04 left in the period, Householder again picked off a clearing pass and was able to fire a shot into the net, giving the Cardinals a 2-1 lead.

With the score still 2-1 late in the game, the Eagles tried to pull their goalie for an extra attacker but were unable to score the equalizing goal.