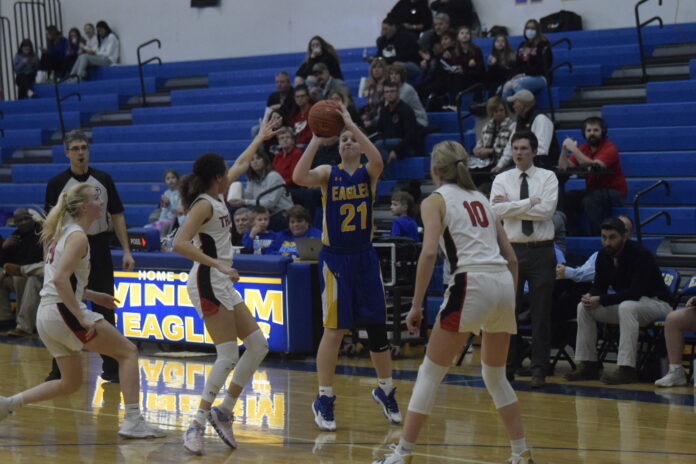 Worthington’s height and length played a big role Thursday night, as the Trojans ran away with a 92-57 victory over a shorthanded Windom Eagle girls basketball team in Windom.

Worthington pounded the ball into the lane throughout the game, shooting 59% from the field as a team and 65% from two-point range. The Trojans outscored the Eagles 60-6 in the paint.

Windom tried to keep close, but had a cold first half from the field, which allowed the Trojans to take a 37-point halftime lead.

Windom warmed up from outside in the second half, hitting 14 three-pointers as a team for the game.

Red Rock Central battered Murray County Central in the lane in the second half Thursday, pulling away for a 70-48 victory at Lamberton.

The Falcons held a slim four-point halftime lead, but Karli Arkell and Sondra Rindfleisch combined for 24 second-half points, as the Falcons outscored MCC 41-23 in the second half.

Lilly Stavnes shouldered the load early for the Falcons, scoring 16 of her game-high 19 points in the first half. Arkell added 18 and Rindfleisch finished with 14 in the win.

Westbrook-Walnut Grove revved up the defense in the second half, holding Adrian-Ellsworth to 13 points over the final 18 minutes to claim a 49-38 win at Ellsworth.

The Chargers trailed by four at halftime, but found their offensive touch in the second half. Isabel Klumper scored 12 of her team-high 19 points in the second half, including 7-of-10 from the line for the game.

Abby Wiggins added 18 points in the game, 12 in the first half.

Mt. Lake Area-Comfrey fell behind early Thursday and couldn’t catch up, dropping a 59-44 decision to Southwest Minnesota Christian in Edgerton.

The Eagles raced to an 18-point halftime lead while holding the Wolverine offense in check in the first half.

MLAC battled back in the second half, but was unable to close the deficit below 10 points.