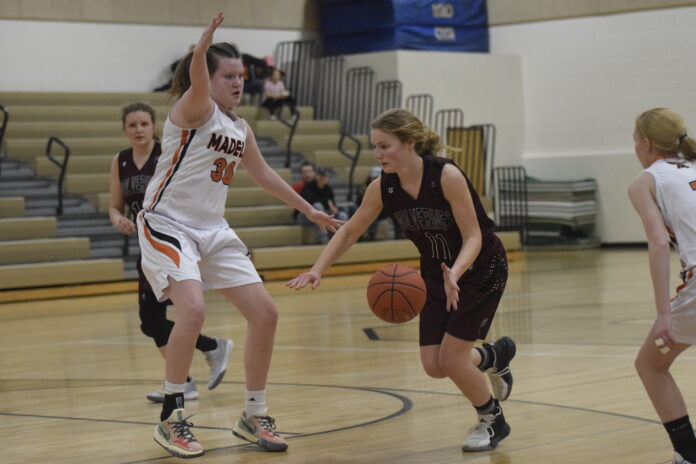 A back-and-forth game saw the Windom girls basketball team get the last word Tuesday night, claiming a 64-62 victory over Redwood Valley at Windom.

The Eagles trailed by four points at halftime but turned up the intensity in the second half, quickly climbing into the lead.

After seeing the lead change hands several times throughout the game, Redwood Valley took a 62-61 lead on a three-pointer from Jess Barber with 1:25 left on the clock. But the Eagles answered, with Kendyl Sammons drilling a three-pointer of her own moments later. The Cardinals’ final attempt to tie the game came up empty, preserving the victory.

Hadley Sammons led the Eagles with 29 points. Hannah Dauer scored all of her 12 points in the first half. KJ Huska added 10 points and Kendyl Sammons finished with nine, hitting three key second-half three-pointers.

Mt. Lake Area-Comfrey had a strong defensive performance and raced past a young Madelia squad for a 75-14 victory Tuesday in Comfrey.

The Wolverines held the Blackhawks to one first-half field goal on its way to a dominant 41-4 lead. All but one player who saw action for the Wolverines found the scoring column in the victory.