Eagles fall to Cardinals in finals 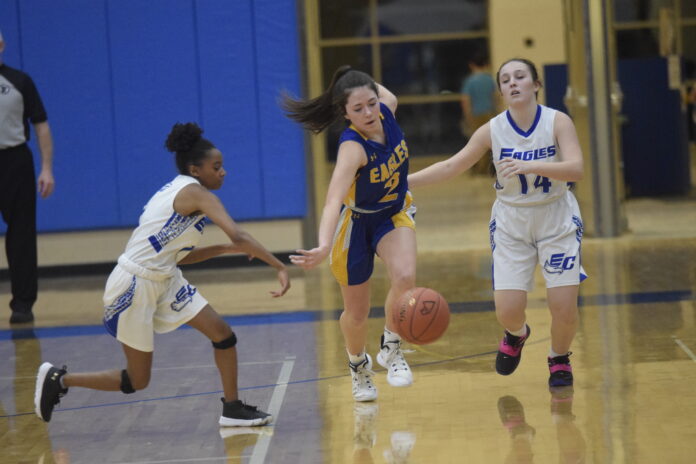 The Windom Eagle girls basketball team went ice cold on its home floor Wednesday afternoon, which allowed Fairmont to cruise to a 72-27 victory in the championship of the Windom Holiday Classic.

The Eagles were held to 21% shooting from the field. A day after hitting 11 three-pointers in the opening round, Windom was outscored 27-9 from three-point range against Fairmont.

The Cardinals were able to create turnovers and transition baskets, outscoring the Eagles 14-0 in transition while forcing 21 turnovers for the game.

Tristyn Maras led the Eagles with 10 points in the loss. Hadley Sammons and KJ Huska each scored six points.

The Windom Eagle girls basketball team powered its way to victory Tuesday in the opening game of the Windom Holiday Classic, racing to a 78-43 win over East Central.

The Eagles were able to force East Central into 21 turnovers in the game. Windom also dominated the glass, outrebounding East Central 45-28 in the contest.

KJ Huska led the Eagles with 21 points. Tristyn Maras poured in a career-high 21 points and Kendyl Sammons knocked down four three-pointers to finish with 12 points.

Mt. Lake Area-Comfrey did its best to hang around Tuesday evening, but Springfield’s shot shooting from the field and tight defense proved to be the difference in a 58-53 Tiger victory at Mt. Lake.

Springfield shot 38% from the field for the game and outscored the Wolverines 44-20 in the paint. The Tigers also forced 27 Wolverine turnovers, which led to 21 Springfield points.

After trailing by two at halftime, the Wolverines were able to keep things close in the second half, thanks to a hot night from the free throw line. MLAC went 14-of-18 from the stripe as a team, compared to 5-of-12 for the Tigers.

Westbrook-Walnut Grove broke through in the second half Tuesday afternoon, pulling away for a 53-40 victory over Dawson-Boyd in a game played at Southwest Minnesota State University in Marshall.

The first half saw both teams struggle, offensively, as WWG held a slim 14-13 lead. But in the second half, WWG’s offense came to life, while the defense turned up the heat on the Blackjacks. WWG forced 34 turnovers in the game and held Dawson-Boyd to 28% shooting.