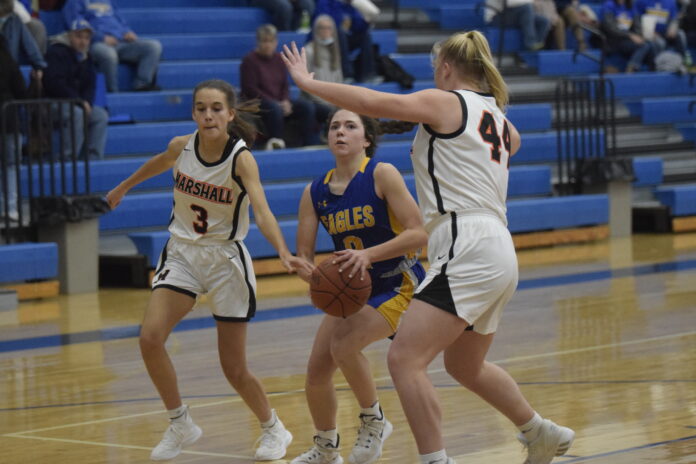 The Windom Eagle girls basketball team dug a hole it couldn’t climb out of Tuesday night, as Marshall pulled away late in the first half and cruised to a 71-51 victory at Windom.

The Tigers used a lengthy scoring run late in the first half to take a 30-point halftime lead. The Eagles settled down in the second half, trimming the deficit as low as 14 points at one point before the Tigers closed out a 20-point victory.

KJ Huska led the Eagles with 16 points in the loss. Hadley Sammons added 11 points and Tristyn Maras finished with 10 points and nine rebounds.

Red Rock Central pounded the ball inside Tuesday night, which allowed the Falcons to claim a 59-46 victory over Hills-Beaver Creek in Lamberton.

The Falcons shot 53% from two-point range and scored 30 points in the paint in the game.

Karli Arkell led the Falcons with 30 points and 13 rebounds in the win. Sondra Rindfleisch and Lilly Stavnes each added eight points.