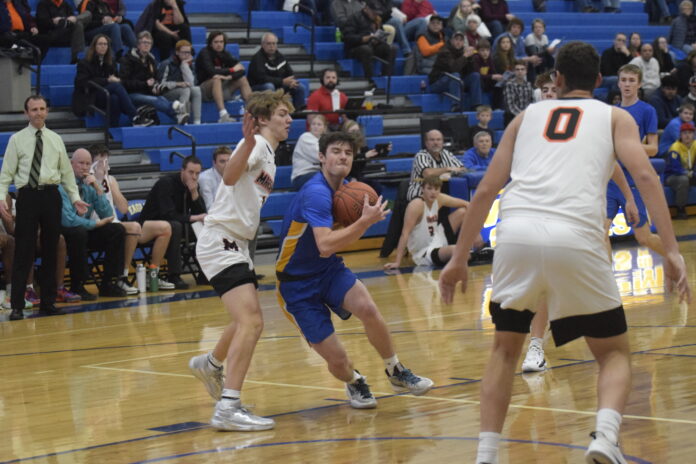 The Windom Eagle boys basketball team put up a big fight Tuesday night in their home debut, but Marshall was able to pull away late to secure an 84-73 win, dropping the Eagles to 0-5 for the season.

Marshall used a run late in the first half to take a six-point halftime lead, but the Eagles were able to battle back early in the second half.

But free throws proved to be the difference in the game, as Marshall went 24-of-31, compared to 11-of-18 for the Eagles.

Mt. Lake Area-Comfrey surged in the second half Tuesday night, storming past Heron Lake-Okabena-Fulda for a 61-54 victory in Mt. Lake.

HLOF held a four-point halftime lead, but Wolverine senior guard Damon Khamvongsa took over the game in the second half, scoring 17 of his game-high 23 points in the final 18 minutes.

Khamvongsa went 11-of-12 from the line for the game, including 7-of-8 in the second half.

Kolby Kremmin and Kody Wassman each added 11 points in the win.

Westbrook-Walnut Grove bombed away from the outside in its home debut Tuesday night, rolling to a 66-41 victory over Edgerton in Westbrook.

The Chargers hit 11 three-pointers in the game, with eight coming in the first half. That staked the Chargers to a 26-point halftime lead.

Cole VanDeWiele drained six treys and finished with a game-high 26 points in the win. Dan Kleven added 17 points and Kole Curry chipped in 12.

Red Rock Central couldn’t overcome a rash of turnovers Tuesday night, as the Falcons fell 66-45 to Adrian-Ellsworth in Ellsworth.